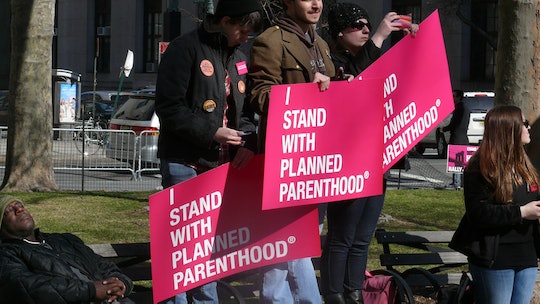 A Former Planned Parenthood Employee Lists Acts Of Violence At Her Clinic, & It's Even Worse Than You Might Think

Greenwood worked at the clinic between 1996 and 1999, according to Mic, and she says that her clinic didn't even provide abortions. In this short time, she "lost count" of how many times stinks bombs were released into the ventilation systems.

Greenwood also tweeted about being called a "murdering whore" for working at the clinic:

While Greenwood's tweets are just now trending, they're actually part of a larger online effort to show the public that if indeed the motive behind the shooting proves to be anti-choice ideology, it won't be an isolated incident. Feminist activist Michelle Kinsey Bruns popularized the #is100enough hashtag, which started with her list of 100 examples of terrorism and intimidation against Planned Parenthood clinics dating back to 1976:

According to a comprehensive Mother Jones article about past incidents at Planned Parenthood locations, attacks against abortion clinics abated somewhat after congress passed a law in 1994 making it a federal crime to "injure, intimidate, or interfere with abortion providers or those seeking their care." Sadly, anti-provider violence is on the rise again this year, ever since the so-called Center For Medical Progress released controversial undercover videos allegedly showing Planned Parenthood employees discussing the selling of fetal tissue. New data from the National Abortion Federation, the professional association for abortion providers in the U.S., show that there has been an "unprecedented surge" in threats and harassment, according to Vicki Saporta, president and CEO of the Federation.

But to anyone who thinks abortion providers will be intimidated by these actions, Bryn Greenwood tweeted her answer: