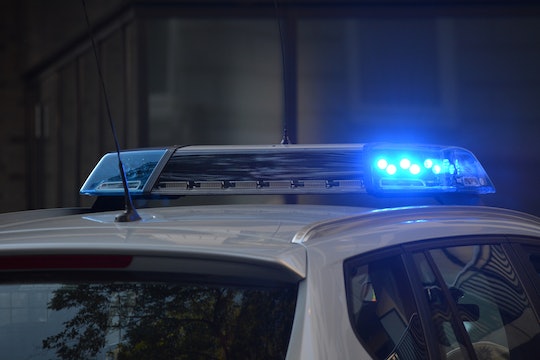 A Police Officer Reportedly Said Police "Only Kill Black People," & It's So Wrong

A recently released dashcam video features a disturbing interaction during a DUI stop, during which it appears that a Georgia officer said cops "only kill black people." In the footage, which was obtained by Atlanta's Channel 2 Action News, a female passenger can be heard expressing apprehension about reaching for her phone. "I've just seen way too many videos of cops," she explained. The officer, identified as Lt. Greg Abbott by Cobb County Police Chief Mike Register, replied, "But you're not black. Remember, we only kill black people. We only kill black people, right? All the videos you've seen, have you seen black people get killed? You have." Abbott's attorney has not responded to Romper's request for comment, but he did provide Channel 2 with the following statement:

Lt. Greg Abbott is a highly respected 28-year veteran of the Cobb County Police Department. He is cooperating with the department's internal investigation and will continue to do so. His comments must be observed in their totality to understand their context. He was attempting to de-escalate a situation involving an uncooperative passenger. In context, his comments were clearly aimed at attempting to gain compliance by using the passenger's own statements and reasoning to avoid making an arrest.

Police Chief Register told the station, "No matter what context it was said, it shouldn’t have been said." He said an internal investigation is underway, and Abbott will remain on desk duty until it's completed. A recent review of the Cobb County Police Department by the International Association of Chiefs of Police stressed that "racism is not an institutional problem" within the department, although public perception differs from that assessment, according to the Marietta Daily Journal.

The way this incident is handled could either shift that perception, or cement it. Abbott was not placed on leave, and it's unclear what, exactly, the internal investigation is looking to find, since nobody seems to be questioning the veracity of the footage. His alleged comments convey a complete indifference to the very real — and justified — fear of police among black Americans. Joking that people of other races don't have to worry about being shot is an implicit acknowledgement of the fact that black people do. The woman in the video shouldn't have had to worry about getting shot for reaching like Philando Castile, not because of her race, but because police shouldn't shoot innocent people. The idea that some cops don't even take that concept seriously is exactly why so many fear them.