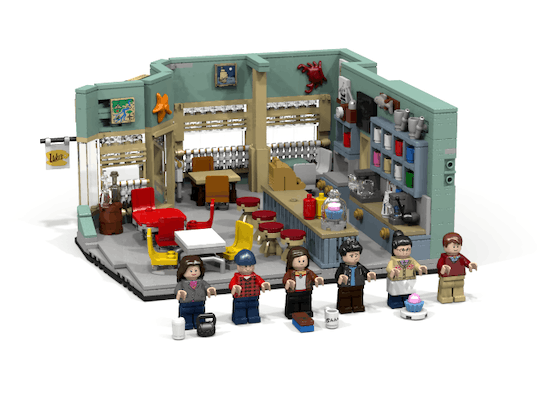 Fans of the hit series Gilmore Girls had their dreams come true when Netflix gave the show the reboot treatment last year. The four-episode revival ended with a massive cliffhanger, and while there are some early reports of Netflix possibly being up for more episodes, fans may have to live with the open-ended finale. Even if another revival is in the works, it won't be binge-able for a while yet. In the meantime, it looks like fans may have something else to look forward to: a Gilmore Girls Lego set could happen — and you can help make it a reality.

Gilmore Girls, starring Lauren Graham and Alexis Bledel, originally ran from 2000-2007. The show follows the lives of a mother-daughter team, Lorelai and Rory Gilmore, and others from the small town of Stars Hollow. The four-episode Netflix revival — Gilmore Girls: A Year In The Life — picked up with the original characters in the present-day; a decade after the original show ended. The revival then left fans with a long-awaited development for one of the show's main characters, but was a fate very much left open-ended, presumably so that more episodes could come in the future.

The show's enduring popularity, and the recent reboot, would be expected to produce a wellspring of new merchandise — and one of the coolest concepts yet could be brought to life with some help from fans. Over at the Legos Ideas lab, anyone can submit ideas for future Lego sets, and those with the most backing will be considered for development. If projects get 10,000 supporters, Lego will officially review them. Then, they could be on their way to becoming an official Lego set.

A user named Rainer Zufall submitted a concept for a Gilmore Girls Lego set on April 30 that is now more than halfway to that 10,000 supporter goal needed for an official review by Lego. Zufall's set features the iconic Luke's Diner and six of the show's major characters in Lego-form: Lorelai and Rory, Luke, Jess, Lane, and Kirk. In the set's description, Zufall wrote:

The idea of building Luke's Diner came to me, because my wife is a really big Gilmore Girls fan and she asked me to build Luke's Diner for her. So, since I am a big Lego fan I was glad to do this for her.

As of Tuesday May 16, Zufall's set has over 8,000 supporters. As a result, Lego had officially extended the project's number of days to earn additional supporters toward the ultimate goal of official review and development.

Fans can help support the set by signing up for an account on the Lego Ideas website and answering a few questions about the set (like how much you they would expect to pay for it, how many sets they would buy, and how difficult they think the build would be to complete) before pledging their support for the project. Pledging support doesn't obligate a supporter to purchase the set, and it's free to make a pledge. As of May 16, the Gilmore Girls set's page has been viewed almost 100,000 times.