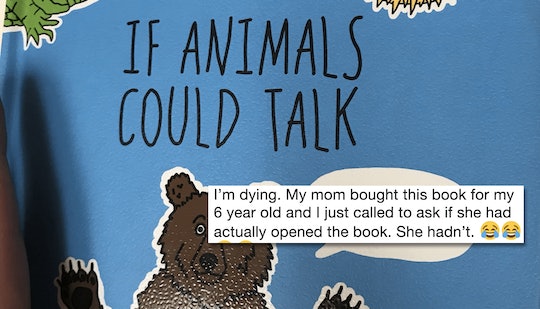 A Grandma Accidentally Gave Her Granddaughter This Very NSFW Book, & The Internet Is Dying

Ah, grandparents — the perpetual spoilers of grandchildren everywhere, sometimes to much parents' chagrin. For one family, a grandparent gift turned into something else completely when this grandma accidentally gave her granddaughter a very NFSW book. Tiffany, who goes by Tiffany1985B on Twitter, recounted the hilariously unfortunate mistake as she and her family discovered just how NSFW the book really was for their 6-year-old daughter. The book in question was If Animals Could Talk, by Carla Butwin and Josh Cassidy, published in April of last year.

On the book's Amazon page, the description reads, "If animals could talk, what would they say? Find out in this hilarious book appropriate for all ages! (Definitely not for all ages.)" And "not for all ages" is exactly what Tiffany's daughter discovered, as she picked up the book and tried to read it with her father, Cody. As Tiffany told BuzzFeed News, her daughter is already an "avid reader," except that those same reading skills were what pointed out the big problem with grandma's book. Tiffany told Mashable that when her daughter Emmersyn tried sounding out some, err, questionable words like "f*ck" and "vagina," she sensed that perhaps something was amiss.

The cover of the book seems innocent enough — and it's totally understandable why Tiffany's mom would think If Animals Could Talk was a children's book — but oh, how so wrong she was.

When Tiffany and Cody went to inspect their daughter's reading material, they discovered the first page of the book was definitely not for children, despite the bright colors and cute illustrations — like this most foul-mouthed little chick.

And it got even better.

According to Tiffany, she called her mother right away to find out if she was playing some kind of joke on their family. Incredibly, this was all just an honest mistake: Tiffany's mother just picked the book off of a kid's book table at her local Barnes & Noble bookstore — but unfortunately, didn't think to actually open the book and maybe check out its contents before buying it for her 6-year-old granddaughter.

Thankfully, it doesn't appear as though young Emmersyn was completely scarred for life by the experience, although perhaps her vocabulary has expanded a bit more than her parents would have liked. Speaking to Mashable, Tiffany said her mother was mortified, but everyone agrees it was a hilarious mistake — and the internet is eternally grateful that she decided to share it on social media this week.

Tiffany even tweeted out to one of the book's authors, Josh Cassidy, about their hilarious children's book mixup: "we got a good laugh tonight when we opened the book Grammy got for our 6 year old we had no idea" — and Cassidy himself responded on Twitter.

And of course, like all things viral on social media, If Animals Could Talk began selling like gangbusters on Amazon, and as of Thursday, is now temporarily out of stock. So, bummer if you're thinking about picking up a copy for yourself. That said, Tiffany did share a ton pages from the book, and you can check out her entire If Animals Could Talk Twitter thread that had much of social media in tears on Wednesday.

If Animals Could Talk is definitely not the first faux children's book out there, as several Twitter users noted when replying to Tiffany's original Twitter post. Adam Mansbach's Go the F**k to Sleep got plenty of honorable mentions as the story went viral, with several parents sharing how the profanity-laden tale of trying to get kids to go to bed was accidentally gifted to their own children — sometimes intentional, other times totally mistaken. If there's one thing that Tiffany, her mother, and their family learned, it's that you definitely cannot judge a book by its cover.