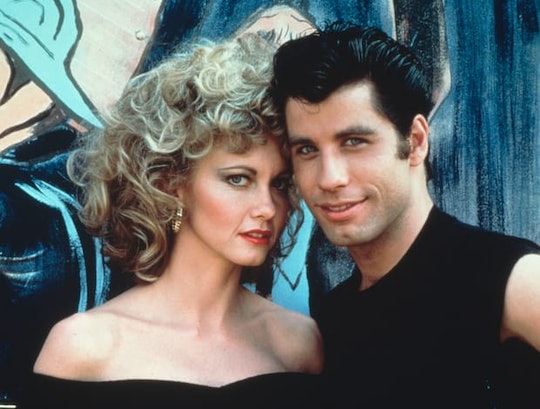 The musical romance movie Grease, based on the 1971 musical of the same name, is a classic and has been ever since it debuted in 1978. It's a timeless love story about a bad boy and a good girl and their increasingly nosey and eccentric group of friends. The movie's main draw was always its array of incredibly catchy and enduring tunes, but things got a little bit weird near the end – like, flying-off-in-a-suddenly-airborne-convertible-weird. Now, a Grease fan theory about Sandy and Danny will completely change how you watch the movie – and in particular, its ending.

It all started back in 2013, with a rather well-reasoned Reddit post from user Atomicbolt titled "A theory on the ending of 'Grease.'" In it, Atomicbolt attempts to explain that wacky convertible-in-the-sky ending, where star-crossed lovers Sandy and Danny, now both leather-clad and romantically reunited, literally fly off into the sunset together at the graduation carnival and wave goodbye to all of their friends.

To be fair, the movie did have the occasional hallucinatory music sequence – Frenchy's Frankie Avalon-starring "Beauty School Dropout" daydream, for one. But that car sequence always stuck out in a weird way, given that the rest of the movie was rooted in reality (albeit a reality where breaking into spontaneous, immaculately-choreographed song and dance numbers was the norm).

Atomicbolt reasons that this strange sequence can be explained by one simple fact: Sandy is actually dead and has been dead for the entire movie, which, in this explanation, was actually "a drowning woman's coma fantasy."

"At the end of 'Grease,' Sandy and Danny get into a red convertible and drive away from the fair. The car promptly defies the laws of gravity and flies into the sky. How did the car fly? At the start of the film, we see Danny and Sandy meeting on the beach. Later, Danny explains through song that they first met when Danny 'saved her life – she nearly drowned.' Sandy actually did drown on the beach that day. As she drowned, her brain deprived of oxygen, she had a vivid coma fantasy involving her summer fling Danny, where they shared a magical year of high school together. The visions get increasingly outlandish as time passes, until finally, as Danny desperately tries to resuscitate her on the beach she sees herself flying into Heaven in her dying moment."

Uhhhh... This is morbid as hell and pretty out there, but weirdly makes a lot of sense. It's unclear how exactly the three-and-a-half year old theory resurfaced earlier this week, but it gained a lot of traction after Sarah Michelle Gellar made a Facebook post and tweeted about it on September 7, having just recently come across the theory.

With this interpretation, re-watching the movie is a little weird. Sure, it's plausible, but if Sandy is dying, why would she imagine a reality with all of these increasingly irritating obstacles standing in the way of her relationship with Danny? Or Rizzo's almost-pregnancy? Or Frenchy's various hair-dying debacles? Or an annoying AF friend like Jan?

Many Grease fans are super unhappy with this theory and are actively shutting it down – mostly by asking the very important question, "How do you explain Grease 2, then?" A good question, and one that doesn't fit neatly into this interpretation of the story. Either way, Grease will remain a classic and we can just chock up this dead Sandy outrage to yet another wannabe entry in the ever-popular "Dead All Along" trope.