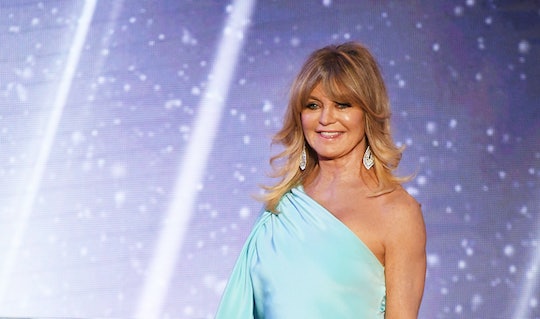 There are infinite forking paths on the internet, one of which leads to a video Goldie Hawn posted of herself in quarantine dancing vigorously on a mini trampoline to Dua Lipa. Hawn, 74, was a dancer before she was an actor (and later a mother and grandmother), and dancing — "mindful movement" — remains a key element of her mental health toolkit.

“Back in the '70s, I was in analysis myself, just because I was growing successful,” she says by phone. “It was a weird feeling, you know?” She graduated the “University of Goldie Hawn” after nine years — her psychotherapist told her she had no need for him anymore — and later funneled her knowledge into a long-running initiative to teach children about mindfulness, MindUP. Launched almost two decades ago through the Goldie Hawn Foundation, MindUP is based in neuroscience, with tangible results. A 2016 book, 10 Mindful Minutes: Giving Our Children the Social and Emotional Skills to Lead Smarter, Healthier, and Happier Lives made her approach accessible to parents; more recently, MindUP has been building out its video resources for families.

A late-April MindUP video explained the power of breathing and meditation — concepts that the program describes as “brain breaks.” Sitting cross-legged in a wicker chair, looking quintessentially like Goldie Hawn in her yoga clothes by a pot of bamboo, she explains how focused breathing through the nose can calm the amygdala (the “barking dog” in MindUP speak), and let the prefrontal cortex (the “wise owl”) think clearly, overriding the fight or flight response we feel when we encounter a stressor. (A prolonged stress response has been shown to impede learning and impact relationships and health.) “People said, 'You'll never teach children that. How are you going to do that? Blah, blah, blah,'” recalls Hawn, “And I said, 'Watch me, because it's not that hard.' I mean, we're not doing brain surgery.”

These are strategies she has used throughout her life. As a young working mother in Hollywood in the '70s and '80s, she would rush home in time for the kids’ baths, but sit outside and meditate for a few minutes before she entered the house: “I had to get rid of the mind busy-ness, the angst, the uncertainties. Oh my God, I've got to learn lines. Oh my God, I've got to, I, I, I, I. I've got to do this. The ‘I’ started disappearing, and I realized I had to be there for the children. That was it. So the kids mattered, not me.” At home with her children, Kate, Oliver, and later Wyatt, “it was like the day started all over. And we had to be ready for it. So I was.”

Hawn's most iconic roles have her spinning gold from disastrous set-ups — divorce in The First Wives’ Club, being widowed and tricked into enlisting in the army as “Private Benjamin” in the film of the same name. In Overboard, she falls off a yacht, suffers amnesia, and loses her identity, but winds up with Kurt Russell. Offscreen, Hawn's life demonstrates the same buoyancy (she, too, wound up with Kurt Russell). Born an optimist, she is also a lifelong student of mental wellbeing.

I went over, and I distanced. We played against the glass. I waved to her, and she waved, and we blew kisses to each other. Well, it made my day.

Today, the field of positive psychology would describe her approach in terms of “positive feedback pathways," but the fundamentals of happiness haven't changed since the ‘70s. “For you, mom and dad, when you wake up in the middle of the night, stop thinking, and start breathing,” advises a woman whose grown children regularly adulate her on social media. “Breathe deep through your nose, and let it out through your nose.”

I’m not saying that Goldie Hawn invented positive psychology, but I am saying that the founder of positive psychology, Martin Seligman, essentially just gave an empirical basis in the '90s to what Hawn already knew. “Right now,” during the lockdown, “our universe is very small, but actually the universe is made up of a lot of very small things. Particles, and waves, and atoms, and neutrons,” she says. “Why don't we become our own little atoms, in our own house, and become a generator of good thinking, and good actions, and living together in the now, and be appreciative that you're alive?”

For her, that looks like driving by her children’s houses and saying, “I love you.” Hawn recently saw her 1-year-old granddaughter Rani Rose, Kate Hudson’s youngest. “I went over, and I distanced,” says Hawn, who has six grandchildren. “We played against the glass. I waved to her, and she waved, and we blew kisses to each other. Well, it made my day.” She has also seen her 6-year-old granddaughter at a distance. “'Gogo, I wish I could hug you, and hold you,'” she told her grandmother. “That corona, that darn corona, I wish it would go away.”

She is optimistic about kids showing resilience through school closures and forced isolation, and says it isn’t all bad. “Mom is home all the time. Not a bad thing. Not for them. They feel secure. They feel good that you're there.” And you can talk through their feelings, help them practice gratitude, sit with them and teach them to breathe, with flow-on effects for your own wellbeing. The stress of the current moment is very real for parents — perhaps more so than for children. Studies in recent years have found that where children have anxiety, treating the parents is as effective as treating the child.

Hawn has, in her journey, spent some time at laughing clubs. “You sit in a circle, and you start, you do this: Ha, ha, hee, hee. And, everybody does ha, ha, hee, hee, until eventually you start laughing,” she says. That action affects your nervous system and immune system. It's a way of self-regulating. Here's another way of teaching it: If you dance, like Hawn, cutting the air with your arms and drumming your legs into the mat, you can get your heart rate up. “You find your heartbeat. And then you breathe, and you see how quickly your heart rate goes back down.” In paying attention to your heartbeat, “you realize that that's something that's in you. You can control it.”

“We can't control this virus, other than by doing all the right things we're supposed to, and being smart, and not being so anxious, to make life normal again.”

I'm telling you, I cry every day at least three times. I do. But we can't carry it all day.

Partway through the call, it begins to feel as though the walls have floated away and we are in the black room at the end of The Neverending Story, suspended in space. “The idea of self-care is always very difficult for parents,” I point out, but especially right now. I like all her techniques, but I’m asking, essentially, for the bigger answer. “This is what I believe, OK. I'm not a doctor. I'm somebody who's just lived a long, a pretty good life,” Hawn says. “We were born, I believe, with a seed of joy. And, that seed of joy, I imagine, lives deep in my heart.”

Hawn, perhaps sensing a wobbly kind of energy coming from me, has shifted seamlessly into guided meditation mode, and I say nothing at all for minutes on end.

“Sit there, and imagine this beautiful golden ball in the middle of your chest, and let it vibrate, and just let it all shine out from you. Let that shine right out from your chest.

“Once you start giving, and vibrating that beautiful light out of you, to others, who you love, that will give you a sense of purpose, and you will see the beauty of your own soul.”

Her words are the Peloton class I didn’t know I needed. Sequestered behind my bed while the kids romp around the apartment, golden energy is spiraling out of the area by the side table with the eight water glasses on it.

It’s not about never experiencing adversity as a parent, but finding ways to cultivate resilience yourself. “I'm telling you, I cry every day at least three times. I do,” says Hawn. “But we can't carry it all day. There's a time for tears. There's a time for ruminating. And then, there's a whole bunch of time to find something good to do, to be, to think, to read, to feel, just for the day.”

Visit MindUP to view activities to cultivate mindfulness, teach a child how to take a “brain break,” and find out more.