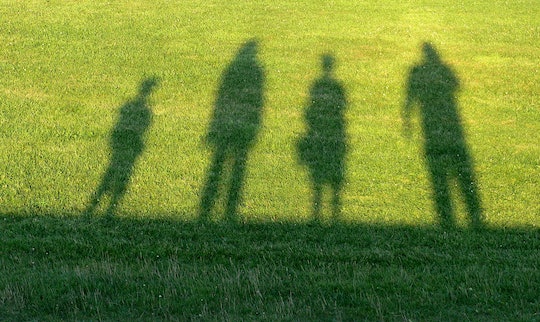 For families with more than two parents, the legal challenges of raising a child can be daunting. The laws surrounding polyamory (the practice of having more than one partner simultaneously), particularly if those who are in polyamorous relationships would like to marry, vary throughout the United States. But despite the lack of any federal laws, a judge just granted custody to a polyamorous family in New York, and it's a huge step forward.

In 2013, the state of California put protections in place to help families with more than two parents navigate custody challenges. While it was a major step ahead for recognition of parental rights among polyamorous couples who are raising children — or parents who are co-parenting with their new partners and biological parents — it was just one state. While exact numbers aren't known, researchers estimate around 5 percent of Americans participate in some form of ethical non-monogamy, according to The Advocate. And while not everyone involved in non-monogamous relationships want to get married or raise children, there are certainly those who do. Traditional laws on the books in the U.S. are equipped to deal with custody between two parents, and not necessarily heterosexual couples only. In recent years, strides have been made in providing custody to same-sex couples.

Although the law has started to broaden its recognition of all the ways families come together, other than California, there haven't been many strides for polyamorous families. But that may be changing: last week in the state of New York, a judge in the Suffolk County Supreme Court granted "tri-custody" to a Long Island family. The case, which involved a married couple and another woman who began practicing polyamory in 2001, is the first of its kind in the state of New York, according to the New York Post.

Dawn and Michael Marano, who live in Bay Shore, had been married since 1994 when they began a polyamorous relationship with Audria Garcia, who had been their neighbor. After several years, the trio discussed having a child because Dawn was infertile, and she and Michael had not been able to conceive. Garcia agreed to have the baby with Michael, and all three shared parenting responsibilities. But in 2008, Dawn and Garcia moved out and became a couple on their own. Michael, who was the child's biological father, sued for custody, and he and Dawn legally divorced.

The three eventually landed in court to try to arrange a custody setup that would work best for the child, a 10-year-old boy who feels that all three adults are his parents. Suffolk County Court Judge H. Patrick Leis III ruled that the three adults would share formal custody of the boy, who lives primarily with Garcia and Dawn, but spends weekends with his father, according to Glamour.

Defining custody in any case — whether it be because parents have separated, there are several parents involved, or custody needs to be given to a non-parent guardian — is vital to the health and safety of a child. Everything from picking up a kid from school to being legally able to consent to treatment should the child end up in the hospital is determined by legal custody. Often, these cases are very difficult and emotionally complex for everyone involved, and the Garcia-Morano case is no different: while Garcia and Dawn are content with the judge's ruling, Michael plans to appeal, according to Refinery29.