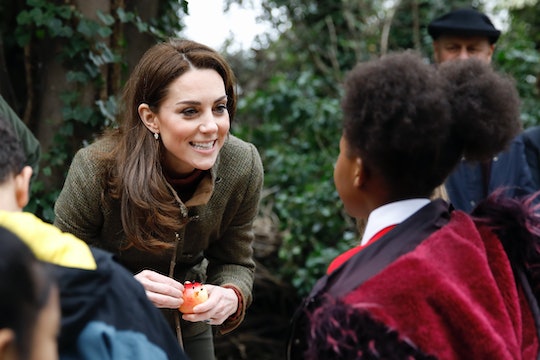 Despite being some of the most followed, documented and photographed individuals in the world, there's still so much we've yet to know about the royal family. (For all of their public status, they are notably discreet regarding details of their personal lives, to be fair.) For example, a kid asked Kate Middleton if the Queen eats pizza, and she kind of had the best response ever.

During a visit to the King Henry’s Walk Garden in the London borough of Islington on Tuesday, People reported that an 8-year-old asked Kate: "Has the Queen ever had pizza?" She responded: “You know, that’s such a good question. I don’t know. Maybe next time I see her, shall I ask?”

Though it probably wouldn't surprise anyone if some good old greasy pizza isn't on the royal menu typically, it's probably unlikely that the Queen has never had pizza, ever. To be honest, she is human still, and what is more integral to the human experience than crushing a few slices now and again? Though it's clear not even her daughter-in-law is sure whether or not her Majesty is a fan of the classic dish, we can only hope that one day, Kate will report back on her findings.

Though the royals are typically pretty mum about the Queen's life, once in a while, they do grace us with a rare interview and shed some light on what life is like behind the palace gates.

In 2016, in honor of a documentary being produced about the Queen's life, Kate did speak out on her grandmother-in-law, sharing a sweet tidbit about the relationship she has with her son, George. "George is only two and a half, he calls her 'Gan-Gan'," she said. "She always leaves a little gift or something in their room when we go and stay and that just shows I think her love for her family." It was the first TV interview Kate had done since she and William got engaged in 2010.

During that interview, ABC reported that Kate opened up about the first time she met the Queen, saying: "I first met her at Peter and Autumn's wedding and again it was amongst a lot of other guests and she was very friendly and no it was fine."

William added: "She was very welcoming, she knew it was a big day and everything was going on with Peter and Autumn, she wanted to meet Kate for a while, so it was very nice for her to come over and say hello and have a little chat," continuing to note that the families got along well, and it was evident that the Queen liked Kate from the start.

Though she's still unsure about whether or not the Queen enjoys pizza, Kate has opened up about the fact that her kids love it a lot, especially when they get to make it themselves.

“I’ve done that with George and Charlotte — making pizza dough,” Hello! reported she said. “They love it because they can get their hands messy.” Food Network also reported that Kate has been seen buying her kids Kellogg's cereal, as well as snacking on popcorn and ice cream.

Though there's not much that's super relatable about the lives of royals, at least their children's food choices are pretty much as normal as it gets. Though we'll have to hang tight for the follow up on whether or not the Queen digs into the pies as well, we can say thanks to Kate for at least being willing to investigate this absolutely essential piece of royal information for us.