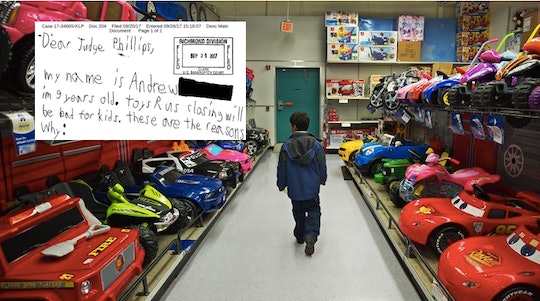 Nothing beats the experience of going to a toy store when you're a kid. Maybe it is because you're seeing all of those toys from the commercials (and YouTube unboxings for the first time) or maybe it is because toy stores seem like an endless opportunity for fun. Whatever the case may be, shopping on Amazon for toys pales in comparison to the real deal. And even young kids are aware of that. I mean, this kid begged the Toys "R" Us bankruptcy judge not to close the popular chain's stores and his passion for the keeping them could not be any more valid.

There is no denying that when kids are passionate about things, there is no stopping them. Some kids write their senators about the dangers of climate change. Other kids write the President of the United States asking if they can mow the White House lawn. But this one 9-year-old, Andrew, wrote to judge Keith Phillips in the Eastern District of Virginia, asking him if he could keep Toys "R" Us open. I don't blame him — toy stores are the best thing to be passionate about at a young age.

Andrew's letter was written for a good reason. Earlier this month, the major toy retailer filed for voluntary Chapter 11 bankruptcy to relieve itself of debt, according to CNBC. In other words, it will restructure its debt and give itself some "financial flexibility" without having to close all of the stores.

But hearing that your favorite store filed for bankruptcy is scary to anyone, let alone a kid who doesn't understand what that means just yet. And in the letter penned to the judge, Andrew presents his argument (with three key reasons backing him up) for why his favorite store should stay open. His main reason? Closing Toys "R" Us would be bad for kids. I don't blame him.

In the letter, Andrew writes:

Toys "R" Us closing will be bad for kids. These are the reasons why:

1. Kids like that there is a store just for them.

2. Kids would rather be promised a trip to Toys "R" Us than any other store.

3. Kids can run through the aisles at Toys "R" Us and find stuff they like but in any other store there won't be just toys. Kids might not have a device to see online stores or it's easier to browse in a real store than online.

He does have a point. Luckily for Andrew, he will have quite a bit of time left with his favorite toy store. According to CNBC, when Toys "R" Us declared bankruptcy, it did also say that the 1,600 Toys "R" Us and Babies "R" Us stores would continue to operate as usual around the world.

But it is unclear just how long every one of these 1,600 stores will stay open. According to USA Today, bankruptcy experts say that Toys "R" Us stores will "inevitably" begin shutting down after the holiday season. But on the bright side, there is a possibility that the big box toy store will start transitioning into smaller spaces, according to USA Today. This means that kids like Andrew can still run through the aisles of Toys "R" Us, but with just a little less space to do so.

While this is great news for Andrew and his friends who like a store that is "just for them," parents who were looking forward to snagging some going out of business deals from Toys "R" Us are out of luck. There are no plans for liquidation sales, according to USA Today, and people will have to wait until after the holidays to bank on getting toys marked down for great prices.

While some parents would probably love to keep their children away from a Toys "R" Us, Andrew's letter to the deciding judge ends on one very solid note that would convince any judge (or parent) to go his way. "Please don't let Toys "R" Us close it will make kids very unhappy," he wrote.

He could not be more right.