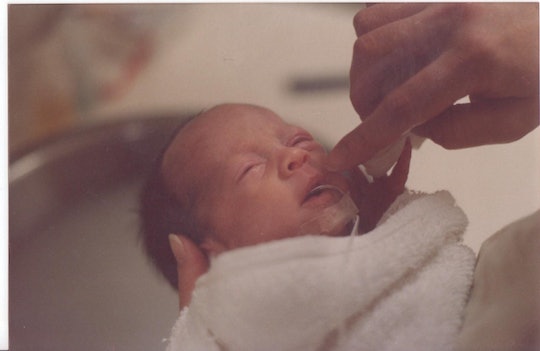 A Letter To The NICU Nurse Who Took Care Of Me, From A Mom Of Two Preemies

When I was born 30 years ago, I weighed only 2 lbs., 2 oz. My mom isn't entirely sure exactly how far along she was with me when I was born, but based on my size, she was probably just beginning her third trimester when she went into labor. Growing up, I saw the photos and heard the stories my family would tell about that time — about how small I was, about how I spent three months in the hospital after I was born, about the way they struggled to find clothes small enough to actually bring me home in when it was time — but, for the most part, it meant nothing to me. How could it? I had zero recollection of it and nothing tethering me to that experience other than other people's memories. But now, well, now being a preemie mom definitely means something to me.

When I gave birth to my own children, fraternal twins born at exactly 25 weeks and five days gestation, they weighed even less than I did, and were in much worse condition. They needed full ventilatory support to breathe for what seemed like an eternity, and we spent over 100 days in the NICU, riding a rollercoaster of ups and downs, of setbacks and surgeries, before we could bring them home. We made it through in part because of the incredible, heartfelt care we received from the doctors and nurses, the people whose job it was to keep sick, tiny babies like mine alive each time they came on shift. And seeing that care, seeing that dedication to my (and everyone else's) children made me realize that, once upon a time, someone had done all of that for me as well. I have no idea who it was that looked after me when I was the baby in the incubator, and I'll probably never find out. But there are so many things I wish I could say to the NICU nurse who took care of me, now that I'm a preemie mom myself.

What I want her to know is that I realize now everything she would have given me. That she would have spent her 12-hour shifts checking in on me and a number of other babies, making sure we were breathing and stable. And, if she was my nurse at the beginning of my life, I know what a task that would have been. I probably set my monitor alarms off on the regular, taking dips in my oxygen saturation and heart rate that would make my parents' stomachs turn. And each time, she would handle it as best she could, trying to do whatever possible to keep me going, to help get me to a point where, one day, my scared, young parents could finally take me home.

I know what an important part of my life she would have been during those first few months, and what a big role she played in helping me get strong enough to go home and live the rest of my life.

What I'd tell her if I could is that I know now how much of her job was not just looking after me, the baby, but my family too — all of the families — who are scared and in shock and not always very nice or understanding, the people who look to you for answers and explanations and hope and empathy. And I know she'd have had to do it all while walking an incredibly fine line — trying to encourage my family to have hope, to celebrate the little wins, while also knowing full well that anything could happen at any minute that could take me away from them.

I'd want her to know that now I understand how she would have cared for me, that she would have known little details about me, like which side I prefer to lie on, or how I liked to be held. I know that she would've been the person to show my parents how to change my impossibly small diaper for the first time, or how to give me a bath once I got a little bigger. I know what an important part of my life she would have been during those first few months, and what a big role she played in helping me get strong enough to go home and live the rest of my life.

Sometimes I think about her, whoever she is (and, in truth, there were probably many shes throughout my hospital stay), and I wonder about all the time we would have spent together when my parents couldn't be at the hospital, all the hours when they'd have entrusted me in her care, praying that she'd give me everything she possibly could during those hours. And I know that, if they liked and trusted her, they would have felt incredible relief when she was there, knowing that it was OK, that they wouldn't have to worry too much when it was time for them to go home, even though it killed them to actually do it.

Every now and then I think about how wonderful it would be to meet her again after all these years, to say, hey, look! I'm alive and healthy and grown and you helped make that happen! I imagine how much I'd want to thank her for what I knew she gave to me and countless other babies (some of whom would have inevitably died in her care on the really bad days). But as a preemie mom I also know that the bond between a NICU nurse and her tiny patients is a unique one, a finite one, one that exists in a specific way for a specific period of time. My children, Madeleine and Reid, are 3 now, and have since long forgotten about the wonderful, kind women who cared for them — for all of us — and those women themselves have since gone on to care for so many other babies, all in the same way, all with the same amount of dedication. By now, my nurse probably would have no recollection of me at all, probably no memory of my parents either. But for a few months back in 1986, she would have been one of the most important people in my life, and I am so grateful for that.

Sometimes I feel sad knowing that Maddie and Reid will grow up without any real understanding how much some of their amazing nurses — Joan, Kathryn, Narjis, Wendy — meant and still mean to us, how much they gave our little family during the scariest time in our lives. But I also know that that is exactly the way it is supposed to be. And maybe that's OK. After all, I, for one, will never forget.

More Like This
Does The FDA's Plan To Limit Lead In Baby Food Go Far Enough?
25 Boy Names That Start With X & Definitely Lead To Treasure
30 EXtraordinary Girl Names That Begin With X
20 Baby Names You’ll Love If You Love Hazel
What Parents Are Talking About — Delivered Straight To Your Inbox