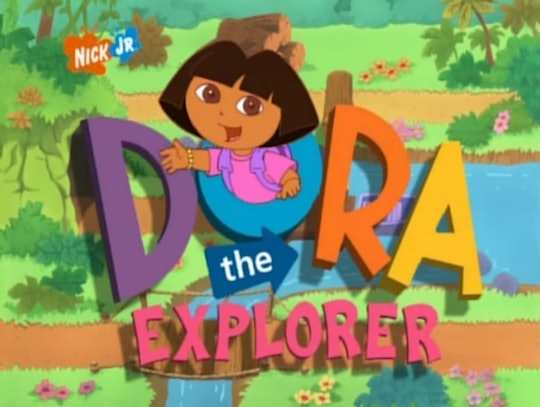 A Live-Action 'Dora The Explorer' Is Coming, But It's Definitely Not What Parents Are Expecting

Today in "What? Why?" news, a beloved (depending on who you ask) cartoon for preschoolers is getting a modern-day update, even if absolutely nobody asked for it. According to The Hollywood Reporter, Michael Bay is rebooting Dora the Explorer. Yes, that Michael Bay. The feature-length live action film will reportedly feature a teenage Dora who moves to the city to live with her cousin, Diego. The script is being written by Nick Stoller, who's known for such family fare as Get Him To the Greek and Neighbors. OK, fine, he also did The Muppets and the Captain Underpants movie, but with Bay on board... I'm not sensing a cutsey kid flick here.

No release date has been set for the film at this time, but THR has reported that Paramount is aiming for 2019, so parents will have a couple years before they're forced to explain to their kids why Dora now carries a gun, and whether Boots survived that helicopter explosion. To be fair, the original Nickelodeon show premiered in 2000, so some of the original fans will actually be old enough to purchase tickets to an R-rated movie. But even though production stopped in 2014, the show still airs on Nick Jr., which could lead to some horrifying mix-ups if this turns out the way that people are assuming it will.

I mean, you saw what Bay did with the Transformers franchise, right? Someone did, anyway, because he's working on over a dozen more sequels, according to SlashFilm. Who is still paying for those?

And while some early fans of Dora might now be old enough for dark, gritty action films with explosions up the wazoo, that doesn't necessarily mean they want to see her in one. Case in point: remember last year, when The Muppets recast Kermit and Miss Piggy as a bitter, estranged couple? Please leave our childhood intact, Hollywood.

Dora is a 7-year-old girl who screams about maps and backpacks (which also scream). There's no place for her in live action.

Who is the target audience for this, exactly? I've been known to host a "Bad Movie Night," and even I can't get behind this.

Back to the map and the backpack, though. They weren't inanimate objects; they were full-fledged characters. Will they be in the movie? Honestly, it'll be weird if they are, and weird if they aren't. This is just bonkers.

I don't even want to think about the costume situation.

Yeah, what about Boots and Swiper? Are there going to be CGI animal friends and foes in Bay's reimagining of Dora? And if not, how will they explain their absence? Don't you dare tell me they're killing Boots. Don't you dare.

I know that this is the decade of rebooting everything the past couple of generations grew up with, but seriously, when will it end?

I kind of want to laugh, but I'm also filled with dread and I'm thinking that we just don't deserve nice things anymore.

And I suppose next you're going to tell me that Dora will no longer break the fourth wall and talk to the audience, all the while pretending that she's an interactive computer game? Sure, it was super bizarre, but that's what made Dora who she was!

Do you think she'll even bother teaching us Spanish anymore?

Please, somebody explain how this character is going to transition from running around in the jungle on scavenger hunts to blowing stuff up. What happened to her? Who hurt Dora?

Is this one of those Producers situations, where they intentionally came up with the worst-sounding idea possible? Or maybe it's more like a Taco Bell deal, where somebody got super stoned and said "Screw it, let's see if this works!"

One bit of good news for Dora fans, though: The picture you keep seeing on Twitter of a white Dora tied to a chair? That's not really from the movie; that's from a College Humor video starring Ariel Winter. Because back in 2012, the idea of a grown-up live action Dora was comically absurd. Now, it's the new normal. We've officially ruined everything, folks. Great job.