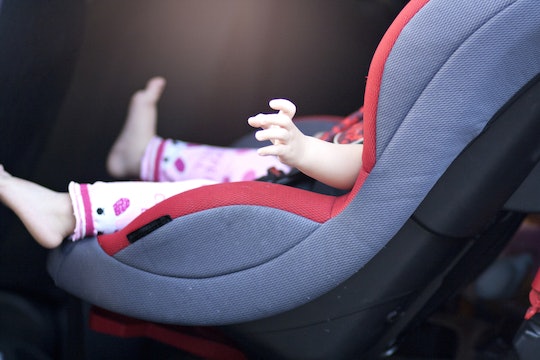 Car seat safety is among one of the top priorities for parents, but, as it turns out, a majority of them who went to events hosted by Safe Kids Worldwide — a global nonprofit that advocates for child safety — didn't know about a crucial feature needed to ensure their little one's seat is safely secured, according to the Chicago Tribune. In fact, many of the parents who were questioned didn't know about the most important part of a child's car seat — and it's safe to say that they probably aren't the only ones.

More Like This
How To Find The Best Insect Repellent For Your Kids & Babies
Here's The Deal With Babies Who Sleep With Their Eyes Half Open
Here's What Your Kid Is Really Saying When They Tell You They Hate You
Vaccinated People Can Ditch Masks. Where Does That Leave Kids?

As Safe Kids Worldwide reported, 64 percent of parents and caregivers did not use the tether — the strap that includes a hook that's on the back or at the top of a car seat — according to the Chicago Tribune. And of those who did use it, only about half did so correctly, the newspaper reported. That means there are a lot of car seats out there carrying kids who potentially aren't properly protected.

Safe Kids Worldwide looked at information from caregivers who attended Buckle Up checkup events from October 2015 to December 2016, and discovered that a majority didn't use the tether at all. Thankfully, Safe Kids Worldwide staff on hand "took that opportunity to educate them," so by the time those participants left the events they were better informed and their children were more fully protected, according to the study's findings. But everyone needs to be aware of the car seat tether and why it's so important and necessary when it comes to car seat safety.

A car that is newer than 2001 is required to have three locations that can accept the hook at the back of the tether in question, according to Lorrie Walker, the technical adviser and training manager at Safe Kids Worldwide who spoke with the Chicago Tribune. That tether can keep the car seat from moving forward in a crash by 4 to 6 inches, and without it, a child's head can go forward and hit the back of the front seat, or make contact with a window or another passenger. It's a possible injury that is mostly preventable, as long as the tether feature is being used properly.

For some reason, a lot of parents or caregivers are just not using the tether when they secure a child in a car seat. In fact, Safe Kids titled the findings of its research on the topic, "Car Seat Tethers: Essential for Safety but Consistently Overlooked." But why would so many caregivers "overlook" this incredibly important safety feature?

This isn't a new dilemma. Over a 10-year time span, the use of a car seat tether was consistently low, WIBW News reported. The piece of equipment is already there and should be used, and experts aren't entirely sure why it's not always utilized. Walker said, according to WIBW:

We don’t know what it is, exactly why parents don’t take that extra little bit of time to hook that tether to the car because it really does improve the safety for the child, even at a sudden stop.

In general, the use of car seats and booster seats reduce the risk of fatal injury by 71 percent for babies under 1 year old, and by 54 percent for toddlers aged 1 to 4, in passenger cars, according to the National Highway Traffic Safety Administration. And if every added safety feature is used properly, such as a car seat tether, those numbers could be even higher.

But some parents or caregivers may just not be aware that tethers are all that important. Luckily, the NHTSA offers a service to get a car seat inspected, so anyone who might be unsure whether they're doing everything they can to use a car seat properly can enter an address on the NHTSA website and find an inspector nearby who can check if their car seat is set up as it should be.

Once parents are made aware of the tether safety feature, they tend to use it correctly, so there is some good news in all of this. When Safe Kids checked car seats again six weeks after caregivers attended one of its car seat checkup events, most of the parents continued to use the tether.

It seems like the key here is not just to raise awareness, but to offer support and guidance to busy parents and caregivers as well. While it may seem like there are a million things to remember as a parent sometimes — and there probably are — important reminders on how to use a car seat to the best of its ability are likely very welcome and are definitely very valuable when it comes to the safety of every child.