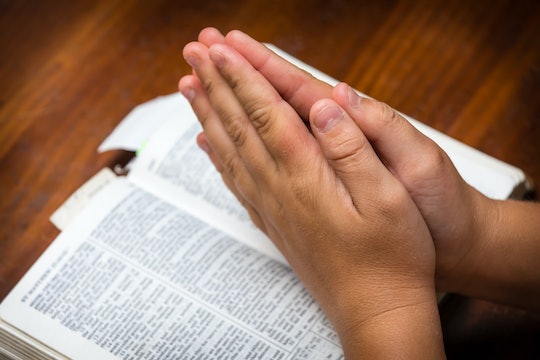 The First Amendment's Establishment Clause prohibits government entities, including public schools, from any actions that favors one religion. Most people take that to mean that schools are therefore forbidden from encouraging or requiring students to practice a particular religion, but at least one school system allegedly has a very different interpretation. A Louisiana student is suing her school for allegedly forcing students to pray, and according to the complaint, the district-wide practice is much more pervasive than just adding "under God" to the Pledge of Allegiance.

Kaylee Cole, told CNN that each day at Lakeside Junior/High School in Sibley, Louisiana, began with students being instructed to stand while the lord's prayer was recited over the PA system. As an agnostic, she'd remain seated, which she claimed would earn her glares from her classmates, and once she said, another student even went so far as to say to her, "Devil be rid of me!" while she alleges a teacher who witnessed the incident did nothing to intervene. She further alleges that another teacher regularly posted teacher messages on the walls of her classroom encouraging students to pray and "Worship God," but according to the school, they have been removed. The morning prayers, which the school insists were voluntary, have ceased ever since until Kaylee and her mother, Christy Cole, filed their lawsuit in December — at least for now.

But that's not good enough for the Coles, or their American Civil Liberties Union attorneys, who noted that there's no guarantee that such practices won't resume in the future. They've asked the court to rule that such proselytizing is unlawful, and to serve the district with an injunction barring schools from doing so in the future. The civil complaint outlines the harm of such customs:

When public schools engage in these unconstitutional activities, they harm schoolchildren by coercing them into religious practices and subjecting them to unwelcome indoctrination and religious messages; they harm parents by usurping their right to control the religious upbringing of their children; and they harm children, families and the community as a whole by sending a divisive message of religious favoritism for those who adhere to school officials’ preferred faith.

And according to the Coles, it goes a lot further than a stray prayer here and there, or one teacher's questionable choices in classroom decor. The suit claims that throughout the past 14 years, Kaylee and her older sister, Ana Lopez-Cole have witnessed a number of troubling incidents at Lakeside, as well as Stewart Elementary School and Central Elementary School, which are also part of the Webster Parish School District. The district did not immediately respond to Romper's request for comment.

The family alleges that indoctrination starts early at Webster Parish schools. Ana's kindergarten teacher showed the class Veggietales cartoons about Bible stories, they said, and when Kaylee was in first grade, she claims she witnessed a teacher grabbing a boy and shoving him out of the classroom because he refused to stand for the morning prayer. Christy said that she contacted the school numerous times over the years regarding the required prayer, and in response, her faith was questioned, and she was told that the practice was legal.

In high school, things allegedly got even more bizarre. Ana said she witness two teachers saying that the card game "Magic: The Gathering" was "against the Bible" and "of the Devil" while one waved a Bible in the air. Kaylee alleges that another teacher once slapped a Bible on her desk and insisted that she take it literally, and he became enraged when Kaylee pointed out that the book contains multiple references to unicorns. The school has also held several mandatory assemblies led by ministers and evangelists, and at least three different science teachers have allegedly told their students that evolution is not real.

Christy, a Baptist, does not believe that the school has a right to force her daughters to observe any religion. Furthermore, the lawsuit cleverly notes, she believes that according to Matthew 6:5-6, public prayer is a sin. But whether it's against God's law or not, compulsory prayer in public school is against United States law, and every student deserves a proper education without being forced to pray for it.