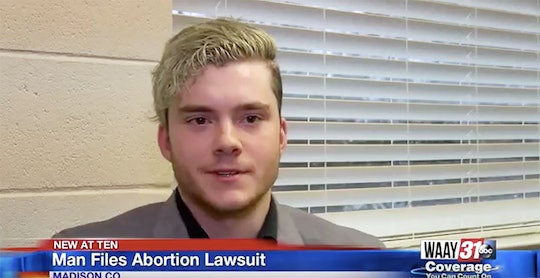 On Tuesday, a judge in Alabama ruled that resident Ryan Magers is allowed to sue the clinic where his ex received an abortion, according to ABC News affiliate WAAY. Following this troubling and landmark ruling, Romper spoke to experts who believe this case sets a dangerous precedent for reproductive rights.

Two years ago, Magers' girlfriend received a medication abortion at the Alabama Women's Center, according to The Washington Post. Magers didn't want his ex — who was six weeks pregnant at the time — to have the procedure, which is why he filed a lawsuit in Madison County, Alabama, in February against the clinic, their employees, and the pharmaceutical company who makes the medication used in an abortion, as ABC 31 reported.

"I'm here for the men who actually want to have their baby," he said about the lawsuit, as ABC 31 reported. "It was just like my whole world fell apart. I believe every child from conception is a baby and deserves to live."

But Magers didn't file the lawsuit just on his own behalf — he "filed a petition to serve as the 'personal representative' of the aborted fetus’ estate," according to the Daily Beast. On Wednesday, a probate court in Alabama ruled that Magers can sue on behalf of himself and “Baby Roe,” according to The Cut.

The judge's ruling is significant because this may be the first case to grant a fetus legal rights, according to TIME, and the first time a lawsuit has been filed on a fetus' behalf.

The judge's ruling was made possible by Amendment 2, a law that passed in Alabama back in November 2018. Passing with 59 percent of the vote, the amendment "recognizes the rights of the unborn and ensures state funds will not go to funding abortion care," according to Alabama.com.

But what this amendment fails to recognize, however, are the rights of the people who can become pregnant. The ruling — under the guise of protecting life — seemingly chips away at the legal rights and autonomy afforded to women, therefore deeming their lives as less important than fetuses.

Furthermore, this ruling jeopardizes a person's right to choose. It seems to suggest that a person's partner can dictate what they choose to do with their body and medical care decisions.

Adrienne Kimmell, NARAL Vice President, touched on these sentiments in an email statement to Romper. "The case in Alabama is chilling because it represents the real-life consequences of anti-choice ‘personhood’ policies, which, by design, seek to demote the fundamental rights of women, and are a stepping stone in the anti-choice movement’s ultimate goal of criminalizing abortion and punishing women," Kimmell says.

"To see it playing out in this case in Alabama should serve as a grave warning sign," she added.

This is happening at a time when Trump and the GOP have ramped up inflammatory rhetoric and have launched a full-fledged misinformation campaign about abortion at the expense of women, families, and reproductive freedom. The dangerous and backward policies, as well as the inflammatory lies, are wholly out-of-touch with the majority of Americans who support access to legal abortion and believe the government should not intervene.

Although women's reproductive rights aren't at risk due to one ruling in Alabama, it speaks to the anti-choice movement's longterm goals.

Heather Shumaker, Senior Counsel at the National Women's Law Center, explains to Romper that while this case "sounds so ridiculous," it's "not really surprising when you consider what the last few years have looked like and given the number of attacks that we’ve seen on reproductive health care, not only in Alabama, but nationally."

"The anti-abortion movement has spent years being very purposeful about how they've chosen state legislators and governors and pushing anti-abortion restrictions and moving towards the framework that gives full legal rights to fetuses," Shumaker added. "The lawsuit fits right in there with their strategy. It’s very consistent with what’s at stake under this lawsuit."

The good news for the pro-choice movement, however, is that Magers will likely be unsuccessful in his lawsuit.

As Shumaker explains to Romper: "Right now, the likelihood that he would be successful in his lawsuit is unlikely, given that Roe vs. Wade is the law of the land and the Supreme Court has held a number of times that similar restrictions are unconstitutional."

Still, this ruling is a reminder that a person's right to choose is something advocates must continue to protect.

"The take here is that it’s unconstitutional now, but it really a slippery slope," she tells Romper about the lawsuit and its impact moving forward. "It’s important to watch the cases that are coming down the pipeline in the courts and watch the legislation that’s coming down the pipeline as well. More and more rights are given to embryos and fetuses over the women who are carrying them."

Shumaker brings up an excellent point in saying that, even if Magers' case fails, his ability to file a lawsuit on behalf of an aborted fetus signals that women's reproductive rights in the United States are always at risk. It's a frightening reminder, but in an important one for those who support a person's right to choose.