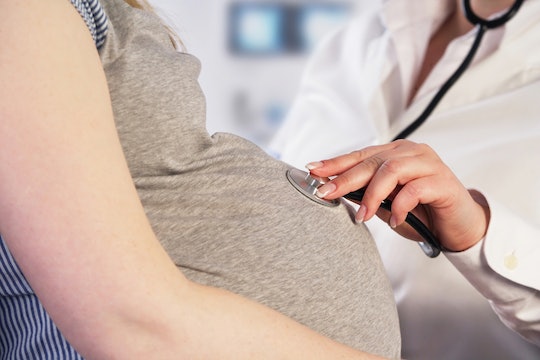 This Common Drug For Yeast Infections Might Cause Miscarriages, Study Finds

Yeast infections are extremely common, especially during pregnancy due to hormonal changes that happen during that time. Although this condition is typically not something to worry about, it's important to note that a certain medication used to treat yeast infections may be linked to an increased risk for miscarriage.

The findings were published on Tuesday, Feb. 19 in the Canadian Medical Association Journal (CMAJ).

It's goes without saying that yeast infections are annoying and frustrating. The condition typically isn't terrible enough to call out sick for, but it's too painful or uncomfortable to ignore entirely. Not to mention, treating a yeast infection typically requires a trip to the doctor if you're pregnant, which can be a hassle if you're already feeling down.

If you're looking for something to blame here, you can thank your hormones. When your hormones are out of whack or changing, it can disrupt your pH balances, which can cause yeast to grow, according to Healthline. Science, y'all.

When you're pregnant and experiencing fluctuating hormones, you're at an especially high risk to possibly develop a yeast infection.

"Vaginal yeast infections can affect up to 75 percent of women during their lifetime and are more prevalent among pregnant women," Dr. Mitchell Kramer, the chair of obstetrics and gynecology at Northwell Health's Huntington Hospital in Huntington, New York, told HealthDay News, per WebMD.

One of the common medications to treat this infection is called fluconazole. The oral drug is "used to prevent and treat a variety of fungal and yeast infections ... It works by stopping the growth of certain types of fungus," according to WebMD.

Unfortunately, this drug has been linked to a potential increased risk for miscarriage, a new study out of Canada claims, according to Science Daily.

Analyzing the data of 441,949 pregnancies from the Quebec Pregnancy Cohort between 1998 and 2015, researchers found that those who were exposed to low doses of fluconazole — 150 milligrams or less for the purpose of the study — were more than twice as likely to experience a miscarriage, compared to those who weren't exposed to the anti-fungal at all, according to People.

Additionally, high doses of the pill were found to further raise the risk of miscarriage and could also potentially lead a fetus to develop a heart defect.

"Taking higher doses of fluconazole over 150 mg in early pregnancy may be linked to a higher chance of a newborn with a heart defect," lead study author Dr. Anick Bérard stated, according to Science Daily.

It's important to note, however, that this study didn't examine other possible issues, such as alcohol consumption, smoking, or folic acid supplementation, according to People.

Of course, this news doesn't mean that you shouldn't treat your yeast infection.

Instead of fluconazole, ask your doctor to prescribe vaginally-administered medications. Dr. Vanessa Paquette, co-author of an editorial that accompanied the study and a pharmacy researcher at the University of British Columbia, explained, according to Reuters:

If you have any lingering concerns about treatment options, don't hesitate to reach out to a trusted medical professional. The more you know, the better.

More Like This
Yes, It’s Possible To Get Pregnant If You Have An IUD
Pelvic Pain During Pregnancy: What Causes It & How To Deal With It
Parents Are Missing Work At Record-Breaking Rates To Take Care Of Sick Kids
Is It Good For Babies To Be Exposed To Germs? It’s Complicated