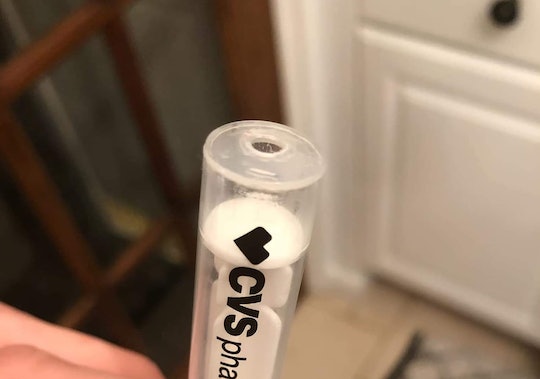 This Trick To Remove Splinters With A Medicine Syringe Is Genius, But Does It Work?

Climbing trees and playing on playground equipment are the pastimes of childhood. Alas, fun though they may be, they are not without the risk of injury. When it comes to decaying branches and playgrounds lined with mulch, splinters happen. They're especially insidious because once they've stuck themselves into our children, we are forced to remove them. It's never easy, and usually causes more pain than the splinter itself. But this genius trick to remove splinters with a medicine syringe is blowing up Facebook, and if it works, it's a real game changer.

Shared almost 200,000 times, this trick, via Certified Health Coach and Cofounder of My One Healthy Life Melissa Brown's Facebook page, calls on an unlikely ally in the war against splinters — a medical dosing syringe. It's that little plunger syringe that a CVS or Walgreens pharmacy may give you when you fill a prescription for your children. They are generally around 10 CCs in size, with a blunt, hollow tip for depressing the fluids into your child's mouth. Brown reported that if you cut off the top, you can place the now larger hole over the splinter, pull back the plunger, and the splinter comes right out, no matter the size. She tells Romper that this isn't her own original idea, but one she heard about and decided to share. "I just saw it and posted it to help others in case it works. My gosh, my poor kids had to endure my squeezing what was already so sore, and so many tears and pain."

So does it work? It makes sense when you think about it. It is literally being suctioned from the skin as opposed to being scraped with a fingernail, or dug out with a needle. Usually, I've employed pointed-tip tweezers or the side of a spoon, but this seems far less invasive than those methods. I contacted Jay Brown, MD FAAP a pediatrician from Santa Monica, California, to find out if a doctor thought that this genius trick to get rid of splinters would work or not. He tells Romper via direct message that he's personally never tried it, but says that "it looks like it makes sense," and it would likely be sooner, rather than later, that he would attempt the method.

There are a ton of remedies for splinters splashed across the internet, some more rational-sounding than others. There are people that soak the area in epsom salt and water; some slap a banana peel on the affected area; and one remedy, popular with my grandmother back in the days of my own tornadic activity, is to make a paste of baking soda and water and use it to cover the area with the splinter. The paste apparently makes the skin swell, bringing the splinter to the surface, according to the Huffington Post. It also makes a bit of a mess, so I am still on team syringe at this point.

The original post on Facebook noted that it works on splinters no matter how small they are. This is a key point about the method because the tiny splinters that hide — often beside bigger splinters — can become inflamed and irritated really quickly. The fact that the syringe seemingly vacuums out the invading speck makes a world of difference. Because, once the area with the splinter becomes red and puffy, getting out the splinter hurts even worse.

The goal of this trick is get everything out quickly, and as painlessly as possible, and it seems like this could achieve that. There's no messy paste, no digging in with sharp implements, and it employs something that most of us have around the house already. Honestly, the biggest challenge that I see comes when you're trying to cut off the tip. That is the only part that doesn't seem like it would be simple. Everything else is really straight forward. With the shares on this post clicking up every day, I'm sure we'll be hearing a lot more about this method, and maybe you'll even get the chance to try it yourself. I know I probably will.

More Like This
Yes, It’s Possible To Get Pregnant If You Have An IUD
Is It Good For Babies To Be Exposed To Germs? It’s Complicated
Pelvic Pain During Pregnancy: What Causes It & How To Deal With It
Parents Are Missing Work At Record-Breaking Rates To Take Care Of Sick Kids