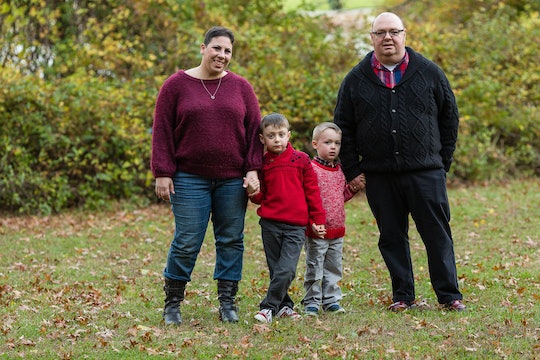 A Miscarriage Takes Longer Than You Think

Out of nowhere, I noticed a heightened sense of smell. I shook my head to clear it, but no luck. Alarm bells went off in my head, but I was so distressed from sleep deprivation, it didn’t yet register what that meant. The only other time my sense of smell had been so intense was while pregnant, and I couldn’t possibly be pregnant again, could I? Could I? Oh dear, no, please God no, my baby Daniel was only 15 weeks old. This was not happening. I could not be pregnant again this soon, could I? Daniel’s meant to be a spoiled only child! Right?

This was the immediate thought process when I realized I was pregnant for the second time. A few days went by while I was in complete denial, waiting fruitlessly for my period to start. Deep down, I knew I was pregnant again. All the same signs from my first pregnancy were there, but I hadn’t taken a test yet, because then it would be real, and I wasn’t ready for it to be real. Life was already too overwhelming, and I was barely holding on; how on earth could I handle another pregnancy?

It was a Friday afternoon, just after Jim had left for work, when I finally took the pregnancy test. I’d purchased a box of three tests the day before and hid them under the bathroom sink until I was ready to take them. I finally got up the nerve on Friday morning, and all three tests gave me the answer I’d known before taking them — positive. Pregnant. Knocked up. Prego. With child. Enceinte. Baby on board. Holy crap.

Even as I knew it was true, I was in utter shock. All I could think of was how would I tell Jim without him freaking out. I mean, really, we were so, so in over our heads with our Daniel as it was. Now we were about to have two?

When I called the doctor to make an appointment, she said I must wait until I was eight weeks along to confirm, and so a future appointment was made. In the meantime, I was advised to take my vitamins, rest as much as possible, all the usual, and so it was that over the next month, life went on. We had a lot of, “What did we do to ourselves?”-type of moments, but for the most part, we were happy, excited, and spent a lot of time planning for the future. Physically I felt good, as I had while pregnant with Daniel, and we just went through our days getting things done as we needed to.

I sat at the table in our living room, head in hands, while Dan was in the playpen playing. I was supposed to be unpacking boxes — we’d only just moved into our apartment three weeks prior, and I still wasn’t unpacked yet. I was so tired all the time, commuting back and forth to work, overwhelmed from the stress and anxiety of the move, and planning Daniel’s baptism. My brain was simply racing, and I tried to calculate when: when it happened, when the new baby would be due, when I needed to go to the doctor, when and how I would tell Jim. If my calculations were correct, my new baby would be born about three weeks prior to Daniel’s first birthday, sometime in early November.

I can recall the phone call to Jim down to the timbre of his voice. At first, all he could say was, “Why did you wait until I got all the way here to tell me this? Why didn’t you take the tests when I was still home?” We did a lot of very nervous laughing that day and came around to embracing the joy (and suppressing the fear) of the situation rather quickly.

They teased us about our rush to grow a family, there was some other chit chat, and then one of the worst events in my life began.

When the OB-GYN appointment rolled around, we were nervous and excited, as any other expectant parents might be. Daniel, who was this supremely chubby and delicious little baby, was in a navy blue and white checkered jumper, that just made his blue eyes seem to glow, and the shorts hugged his leg rolls in the cutest way. The outfit is emblazoned in my mind, because I can see every moment of that day with crystal clarity.

The same obstetrician who had delivered Dan just a scant 20 weeks prior came into the exam room. She and her nurses fussed over Daniel a bit — how could you not? He was so darn perfect. They teased us about our rush to grow a family, there was some other chit chat, and then one of the worst events in my life began.

The doctor brought the doppler over to me, and poked around, trying to find a heartbeat, to confirm the pregnancy test I’d just taken for there in the office. After a few tries in various locations in my abdomen, the doctor looked me in the eye and said, “Jenn, I can’t find a heartbeat.” It didn’t register yet, what she was telling me, and I blithely said, “Well, the same thing happened with Daniel, I’m not worried.” She looked back in her file and murmured about Daniel’s visit being at six weeks and three days. Today I was technically eight weeks and five days along.

The heartbeat should have been loud and clear. I still hadn’t recognized her sense of alarm.

She called to the specialists she shared a building with, and I was immediately sent downstairs for an ultrasound. Jim followed behind with the baby, and he was visibly scared. I tried to tell him it would be fine, but they got me into an exam room, did the ultrasound, and there on the screen was the picture of my uterus, with the fetus clearly discernible, and it was silent. Completely, utterly silent. It still took me a moment to realize that the sonogram tech didn’t just mute the machine or something. And then it hit me like a ton of bricks. The specialist came in and said to us, “This pregnancy is not viable.”

There was no warmth, no apology or words of comfort, and no room for misunderstanding. I was pregnant, but only because I had not yet technically lost my baby.

She would give me a week to pass the baby on my own, or I’d have to come back in for a procedure.

We went back upstairs to follow up with my doctor, and to get instructions for next steps. She was more sympathetic than her coworker, but still matter of fact. It must have just happened, judging by the size of the fetus and the fact that I was still showing as pregnant on the urine test and not having any complications. She would give me a week to pass the baby on my own, or I’d have to come back in for a procedure. And then we were sent on our way, to just wait it out, wait for our baby to leave us, wait for my body to betray us.

The last thing Jim or I wanted to do was see or talk to anyone, so we made three quick calls — to his dad, my mom, and my dad — to tell them all the terrible news, and that they needed to spread the word to everyone else, that we just couldn’t do it. We shut our phones off, took Daniel, and went to spend the day at our happy place, the boardwalk. It was one of those anomalous 90-degree spring days, and the boardwalk was crowded, there were lots of sunbathers, and we could just be alone with ourselves and our thoughts while getting lost in the crowd.

I took the week off from work, not knowing when “it” was going to happen, or even if it would. I was making a cake that week, for the bridal shower of a friend’s sister. It was an expensive commission, and I didn’t want to give it up and let anyone down, and that Thursday, April 19, while I was physically baking and assembling and decorating the cake, was when the miscarriage finally happened. I worked through the cramps, a pain which cruelly mimicked the contractions of childbirth, and the awful, intense bleeding. I was so grateful to have something else to focus on. I found myself angry at my body’s betrayal and so very sad. It was without a doubt one of the worst days of my life.

Thanks to apps like Facebook’s 'On This Day,' which allows you to look at prior posts from that day in previous years, I get to relive it all in pictures.

Over the next days, weeks, and months that followed, I rationalized in every way one could think of. I repeatedly told myself Daniel was far better off as an only child, that we could give him so much more, but come October of that year, I found myself pregnant again, a story for another day. Suffice to say that each year on St. Patrick’s Day the memories start up for me, and in the first week of November, when that baby would have been due, I often find myself inexplicably blue, until I remember. Thanks to apps like Facebook’s “On This Day,” which allows you to look at prior posts from that day in previous years, I get to relive it all in pictures, right down to Daniel, posed in his checkered jumper on our brown recliner before getting in the car to head to the doctor.

The swirl of emotions over those weeks — from finding out we were pregnant to finding out we weren’t — was immense. Disbelief, followed by joy, hope, worry, fear, and then all-encompassing, overwhelming sadness. Just so much sadness. That was followed by anger, agony, despair, and guilt — what did I do wrong that my body couldn’t hold this baby?

I can’t say I regret the miscarriage. If I hadn’t lost that baby, I wouldn’t now have my son Owen, a gift in more ways than I can count. However, knowing that, at 41, I am done having children, it brings a separate sadness.

In my head, and in my deepest heart of hearts, when I refer to the baby I lost, she was a she, and she was the little girl I didn’t get to have. She is the sister in heaven who watches over her brothers who are here on earth with me. I never gave her a name, not even in secret — she is just she or her.

I’ve never even voiced this sentiment to my husband — that’s how secret and precious it is to me — but when I’ve been asked in the past about trying for a girl, or having a third child, or similar, while I have often laughed it off on the outside, the truth is that I am already a mother of three, and my girl is with me wherever I go.