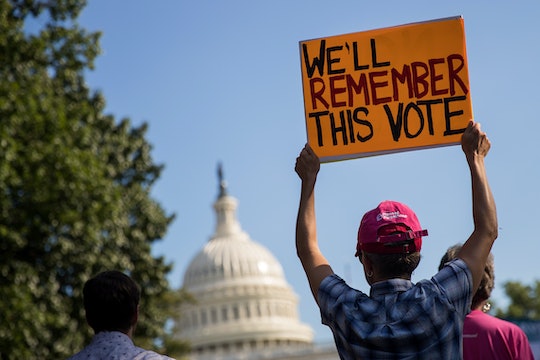 A Woman Was Denied Her Miscarriage Medication Due To Religious Beliefs

In the United States, 10 to 15 percent of pregnancies end in miscarriage in the first 20 weeks, according to statistics from March of Dimes. Each and every loss is heartbreaking and devastating to the women who go through this and their loved ones who suffer from their pain. In those moments, everyone hopes for the world to tread lightly on them — but after a miscarrying woman was denied her prescription to speed up this process due to religious beliefs, people need to hear her story.

After 35-year-old Rachel Peterson got pregnant earlier this year, an ultrasound a few months later showed that her baby had no heartbeat, according to the New York Times. It was there that Peterson found out that she was miscarrying, so her doctor prescribed her misoprostol, or a drug that could speed up the process (and help her avoid surgery).

After receiving such heavy news, she and her husband, Robby Peterson, went to spend some time with family members in their home state of Michigan to decompress, and dropped off their prescription at a pharmacy inside of a Meijer store. But before they went to pick up her prescription, they reportedly received a shocking phone call.

The pharmacist reportedly called Peterson telling her that he, as a "good Catholic male" could not "in good conscience" fill the medication.

"Meijer strives to treat its pharmacy customers with dignity and respect," a representative for Meijer told Romper. "While we cannot comment on any pharmacy customer matter, we apologize for any customer experience that does not align with our core values."

Peterson was able to transfer her prescription to another pharmacy in her hometown, according to the New York Times — although it cut her trip short — and she was able to take her medication. But the pharmacist's comments stuck with her — especially since her miscarriage was beyond her control. Peterson told the New York Times:

I wanted a baby; I didn't want to lose a baby. I felt ashamed, and I didn't have to tell him that information, but I thought, for my safety, to be able to have children again, this was an important step to take. And he denied that to me.

Misoprostol is a medication prescribed to women to help speed up their miscarriage. Miscarriages take multiple weeks to complete on their own, but with the help of the medication, 90 percent of the tissue is passed within the first week, according to American Family Physician. This goes without saying, but having a miscarriage is not easy — not only is it a significant emotional and physical loss, but women can experience significant cramping and have some side effects with the medication.

Unfortunately, Peterson isn't alone in her pain — stories like hers happen all across the nation. Earlier this summer, an Arizona pharmacist reportedly denied to fill Nicole Arteaga's prescription for misoprostol after asking if she was pregnant, according to CNBC.

Pharmacists in only eight states are required to fill prescriptions, regardless of their beliefs, according to NBC — and most drugstores and pharmacies have their own policies about pharmacists and their personal beliefs. But these laws don't take away from Peterson's tragedy.

The good thing is, misoprostol can be obtained online but it is costly, according to The Atlantic. But women shouldn't even have to go through these efforts to obtain the medication — they should be able to receive it no matter what.

Peterson told Detroit Free Press that she hopes by telling her story, other women become aware that pharmacies are capable of denying prescriptions. Peterson said:

I wanted to make sure that people are aware of this because I had no idea. I was naive in that sense. I knew there were people that opposed things like birth control and Plan B, but I didn't think I could get denied a prescription from my doctor. It was quite the eye-opener for both of us, and my family as well.

Everyone is entitled to their own personal beliefs, but when it comes to life saving medication, women also have the right to get their medicine and not feel ashamed.

Let laws like these serve as a motivation to vote in the upcoming mid-term election on Nov. 6 — a vote can simply fill a prescription and change lives.