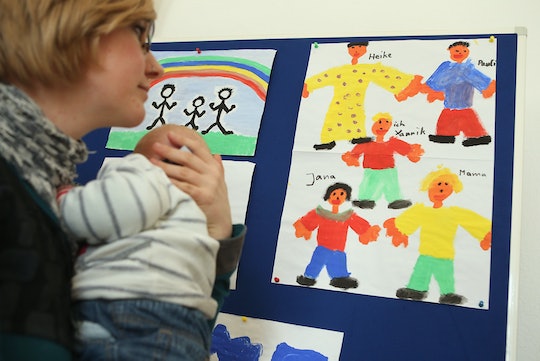 I'm Queer, & I'm Terrified Of Being Stripped Of My Parental Rights

A few years ago, my wife and I sat in our tiny living room, hashing out plans for how to make a baby. As a same-sex couple, we had many decisions to make before becoming parents, decisions like “adoption or pregnancy?” and “who is going to carry?” and “anonymous or known sperm donor?”

These questions are often extremely fraught. I had been told by other same-sex couples that using an anonymous donor through a sperm bank was the best option for a variety of legal reasons, but ultimately, we chose to use a known sperm donor. I never regretted that choice, but I did feel that we were taking a calculated risk. While it seems unlikely we would ever break up, I'm acutely aware that in the event that we did, a court could potentially see our kid's donor as a parent, even though we don't.

Which is why I was so distressed and heartbroken to read about the case of Chris Strickland. On June 1, Strickland's lawyer filed an appeal for a 2016 Rankin County, Mississippi court ruling denying Strickland custody of her two sons with her now-ex-wife. The appeal is currently pending before the Mississippi Supreme Court.

According to Beth Littrell of Lambda Legal Counsel, which is representing Strickland, the Rankin County Chancery Court "carved out an exception to the rule that a child born to a married couple is the legal child of both spouses, ruling that children born as a result of assisted reproduction are the children of the mother and the anonymous sperm donor" — effectively ruling that an anonymous sperm donor had more of a claim to parental rights than Strickland did.

The message is clear: Apparently, if you’re gay, the state can still decide your kids aren’t your kids — even if you use an anonymous sperm donor who plays zero role in your children's lives. This is absolutely terrifying for queer families like mine.

According to NBC News, Chris Strickland and her ex-spouse, Kimberly Day, conceived their younger child in 2011 with the help of an anonymous sperm donor. Day carried the pregnancy, and she is listed as the child's mother on his birth certificate, while Strickland is not. The couple also raised an older child who was adopted, and only Day's name is on his adoption papers. (The couple lived in Mississippi, which did not recognize their marriage as legal.) In October, the court ruled that Chris was not a parent to either child and that the rights of the anonymous sperm donor displaced hers, a decision that she is appealing.

Sperm donors have been granted visitation rights by the courts before. In fact, in 2015, a judge awarded visitation rights to the sperm donors for a New Jersey couple's two kids, even though all parties had agreed beforehand that the donors would play no role in their kids' lives. Yet these donors have typically been people who were friends of the actual parents, who were granted parental rights because they actively pursued them. (That's one of the reasons why lawyers caution same-sex couples are against using known donors in the first place.)

The fear of a donor seeking custody has pushed many a family to use an anonymous sperm donor, because doing so ostensibly negates any legal claim the donor may have to the child. The 2015 SCOTUS ruling legalizing same-sex marriage in all 50 states was supposed to further protect LGBT families from being treated poorly by the court systems.

What Strickland's case, as well as other messy custody cases of LGBT parents prove, is that we were wrong on both counts. What Strickland's case proves is that regardless of whether you use a known or anonymous sperm donor, your rights to parent your own children are still in jeopardy.

My wife and I disregarded the advice to use an anonymous donor and went with a known one for many reasons. Sperm banks have a history of discriminating against gay and trans donors, and we also thought that fresh sperm might be more effective than the frozen sperm you get at a bank (although that assumption was later proven incorrect). Plus, frozen sperm can cost thousands of dollars. Perhaps most importantly, we wanted to have some sense of connection with our kid’s genetic history, so the donor we settled on is a longtime friend, who is transgender. They are more than happy to see our kid when they’re in town, but they are certainly not my child’s parent.

I carried the pregnancy and gave birth to my son, but my wife was there every step of the way. She was the first person to hold him. She changed his diapers. She actually held the syringe of sperm that led to his conception, for goodness sake. We split our childcare duties evenly, and she’s every bit as much a parent as I am, and our son knows it. I love my wife dearly, and cannot imagine my life without her. But in the event that we split up, I believe she has just as much right to parent our child as I do.

My son is now 2 years old. For 2 years and 9 months, I have lived with the knowledge that we made the best choice we could for him, but that it carried some risks. I'm hyper-aware of the fact that if our donor expressed interest in being in our son's life, our rights as parents would be in jeopardy. And I still second-guess our decision to use a known donor instead of anonymous sperm. If we had only made the more responsible decision, I wonder, we wouldn't be open to the risk of being delegitimized by the court systems.

And yet, it turns out that’s crap.

When adults split up, we need the courts to act in the best interests of the children. After all, children going through a divorce have a hard enough time as it is. But if this case is any indication, it is simply impossible for same-sex couples to protect their own rights as parents.

I hope that Strickland's appeal is successful, but regardless of what happens next, this case is a wake-up call for all LGBT parents. No matter how many strides we make, it's still almost impossible to make the courts consider us full parents, with all the rights afforded to heterosexual parents, even if we do things the "right" way.