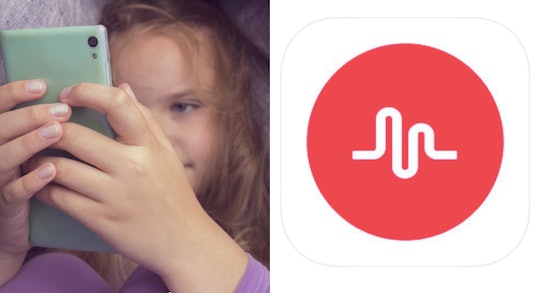 A Mom Did A Deep Dive Into Musical.ly, & What She Found Kids Doing Is Deeply Disturbing

Musical.ly claims to be a global video community that welcomes millions of people around the world every day. It's a self-proclaimed "outlet for creative expression and communication with friends," and it's a "platform that connects individuals to a vibrant and highly engaged community of content creators," according to its website. But one mom recently found out that it's a bit more. Anastasia Basil took a deep dive into the app that her 10-year-old daughter always asks to download so she can make funny lip-sync videos but, when Basil finally succumbed and got the app, what she found was quite disturbing, according to her recent article published on Medium.

Basil created an account under the name gummibear9 and, after spending some time cruising the app, she decided "Nowayismykidgettingthisapp," despite how innocent the app appears on the surface.

"A very helpful naked man live-streamed his live stream (if you know what I mean.)," she wrote. "Kids are going to see it eventually, right? Might as well let them see it now. Might as well get them drunk while we’re at it," she went on.

Kids Were Encouraged To Sexually Objectify Themselves

Kids as young as 8 sexually objectify themselves, and the kids who get it right ("the tweeny Kardashians") gain followers, Basil explained. Those who get it wrong , however, (" those [who are] not 'sexy' enough, funny enough, pop-culturey enough")   are openly ridiculed in the comment section.

"Worse, their 'cringe-worthy' lip sync may be immortalized in 'Musical.ly Cringe Compilation' videos on YouTube," she explained in her post. "Some of these cringe compilations have upwards of five million views."

There Were A Number Of Inappropriate Hashtags

Some kids hashtag their videos to reach a wider audience, but they're doing so with words like "thot," which stands for "that hoe over there," or fgirl, hottie, sxy, whooty, or sin, according to Basil's post.

Kids Were Talking About Rough Sex

"There are kids mouthing words about rough sex," she wrote. And it gets worse.

"I saw a boy around the age of 9, maybe 10, create a user name that was so sexually graphic I had a hard time processing what I was seeing," Basil wrote "A little boy. Not a teenager. A boy."

There Were Videos That Encouraged Hurting Others & Oneself

There are #killingstalking musical.lys, which, according to the post are dark-themed videos showing boys putting knives to girls’ throats. Likewise, there are #selfharm, #cutter, #triggerwarning and more videos that showcase suicide options .

"I saw a boy with a bleeding chest (yes, real blood)," she wrote. "I saw a young girl whose thighs were so cut up I had to take a break from writing this article. A long break. The images are deeply upsetting."

Basil calls the app a "portal into a world where it’s always winter but never Christmas."

"My daughter’s fate is sealed: Next fall she will be one of the dorky kids with a flip phone," she concluded. "Unless there’s a Mickey Mouse flip phone available by then. Good luck, team dork! We can do this."

After what she says she saw on that app, who can blame her?