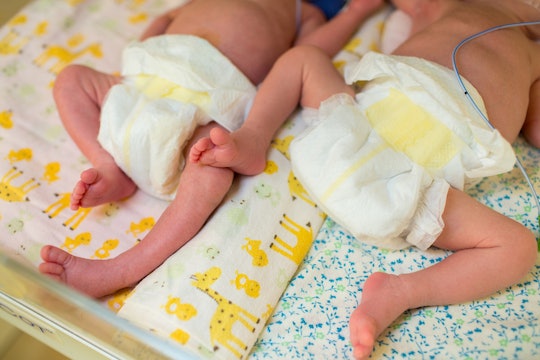 As any parent of twins will likely attest, people seem to be endlessly fascinated by the idea of two babies sharing a womb, especially if it results in identical youngsters no one can properly tell apart. Most often though, twins will actually be fraternal, meaning two eggs were fertilized separately, and while it can sometimes be difficult to tell whether twins of the same sex are identical, it's much more obvious that different sex twins are not. But one extremely rare set of twins born in Australia has shed light on the reality that, there may actually be an in-between option. That's because doctors have identified that a mom gave birth to "semi-identical twins," according to CNN, and it highlights one extremely rare quirk of genetics.

Researchers from the University of New South Wales and the Queensland University of Technology published the details of the case Thursday in The New England Journal of Medicine, and explained that the now 4-year-old twins are thought to be only the second known case of sesquizygotic twins, who share share 89 percent of their DNA.

That makes them distinctly different from most cases of twins. Though sesquizygotic twins share a placenta — like identical (aka monozygotic) twins do — they aren't the result of one fertilized egg splitting in two, but of single egg fertilized by two different sperm, something which should technically be impossible.

The extremely rare outcome was first identified when the Australian twins, who had clearly appeared to be identical, placenta-sharing multiples on prenatal ultrasounds, actually turned out to be brother and sister.

In rare cases, it is possible for monozygotic twins to be opposite sex siblings, as in the case of Turner Syndrome, according to The Washington State Twin Registry, which noted that a male zygote can sometimes split into two embryos, but that "inaccurate copying of the sex chromosomes" could result in one of them developing into a female. But that didn't seem to be the explanation behind the Australian brother/sister duo, though.

If that weren't already a bit mind-boggling though, researchers then believe that the two sets then combined, before splitting to form two separate embryos, eventually turning into a little boy and a little girl. Under usual opposite sex twin circumstances, brother and sister twins would normally share around 50 percent of their DNA, which basically makes them genetically the same as any sibling pair. Thanks to the odd mixing and splitting of the sesquizygotic pair though, their DNA combo makes them more similar than the average fraternal twins, yet not quite as similar as a set of identical twins.

What is perhaps most notable about the sesquizygotic twins is not just that they occurred, but that they survived, and are doing well. After the first-known pair of sesquizygotic was identified by researchers in a 2007 article in Human Genetics, TIME noted that the "triploid" that occurs when two sperm fertilize one egg is thought to only happen around 1 percent of the time, and that the majority of embryos created this way don't develop into living babies.

In other words, the two known "semi-identical" twins definitely seem to be a genetic marvel. And in fact, it seems even more surprising that the Australian twins appear to have been born without any major health issues related to their formation. While the first set of twins certainly beat the odds just by being born, one of the babies was reported as having "ambiguous genitalia," according to The Guardian, as well as ovaries that had not fully formed, and which needed to be removed at age 3.

What does seem to be clear though, is that the very existence of these twins challenges traditional ideas of what is and isn't possible when it comes to twins. So while the majority of the time, twin births will still fall into one of two categories — identical or fraternal — in some very, very rare instances, it does seem possible there can actually be a third option.

More Like This
How To Ask Your Partner For Support When You Need It
Pitocin Induction: What It Is & The Play-By-Play
The Covid Vaccine For Kids Under 5 Has Been Sent To The FDA For Review
How To Breastfeed A Baby With A Cleft Lip Or Cleft Palate