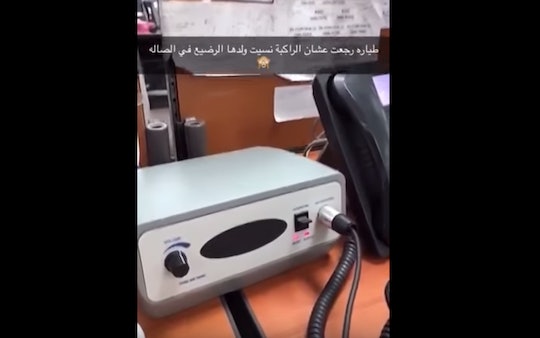 You hear expecting moms lamenting about "pregnancy brain" all of the time. But from experience, this particular brand of forgetfulness has got nothin' on "mom brain." Between sleep deprivation, juggling multiple children, and the general "go, go, go" of parenting, it's a miracle I'm able to function semi-normally. Still, there are times I forget what I'm doing after walking into another room of the house. And I can't remember what we need at the grocery store unless I make a list beforehand. However, this one takes the cake. Because a mom reportedly left her baby in an airport terminal — and forced the pilot to turn the plane around.

Romper has reached out to Saudia Airlines, but did not immediately hear back. According to Gulf News, the bizarre incident happened over this past weekend. A flight — which was initially heading from Jeddah in Saudia Arabia to Kuala Lampur in Malaysia — turned back after a mother told cabin crew she had forgotten her baby in the boarding area at King Abdul Aziz International Airport.

As the Independent reported, a YouTube video of an air control operator speaking with the Saudia Airline pilots is now going viral. (It was creeping up on 450,000 views as of publication of this post.) “May God be with us. Can we come back or what?” the pilot can be heard saying over the radio in the video, per The Independent. The operator takes the flight number and then can be heard asking a colleague about the protocol for such a situation. "This flight is requesting to come back … a passenger forgot her baby in the waiting area, the poor thing."

The operator asks the pilot to repeat his reason for needing to turn back. "We told you, a passenger left her baby in the terminal and refuses to continue the flight," the pilot responds.

To that, the operator replies, "Ok, head back to the gate. This is totally a new one for us!”

OK, OK — maybe it was a bit of a stretch to relate forgetting your baby to having "mom brain." (I fully acknowledge that accidentally leaving an infant at an airport terminal is much bigger deal than forgetting an item on your grocery list.) Still, as mom of four who is constantly juggling a million tasks at once, there's a part of me that wants to give this mother the benefit of the doubt. Maybe she thought someone else had brought the baby onboard the plane? (Like the baby's father, perhaps?) Or maybe she was distracted by a screaming toddler or two demanding snacks. For now, the details surrounding the circumstances of this situation are a bit fuzzy.

According to Newsweek, it appears the mother and child were reunited once the plane returned to the airport. So all's well that ends well, right? Except, I wouldn't want to be that mom getting stared down by annoyed passengers once the plane finally took off again. (Assuming they continued on their journey after the ordeal.) Talk about awkward.

More Like This
The FDA Is Warning Parents To Not Use Baby Neck Floats After One Infant Died
Why Babies Love Water, According To Experts
The Best Toys For 3-Month-Olds
These Downton Abbey-Inspired Baby Names Are So Distinguished