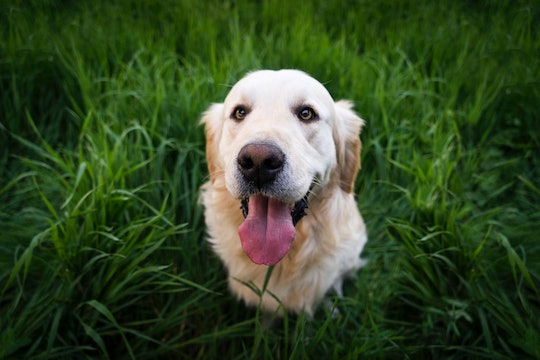 A Mom Watched Her Autistic Son Bond With His Service Dog, & Her Reaction Will Make You Cry

A nonprofit that works to connect service animals with kids with disabilities captured an amazing moment between a little boy and his new service dog. But it wasn't the little boy that tugged at the internet's heart strings so much as it was his mom's reaction to seeing them together for the first time. This photo of a mom watching her autistic son bond with his service dog will definitely make you cry.

The group, 4 Paws For Ability, works to make sure that children with disabilities who could benefit from a service animal are able to have one. They also work with veterans, pairing them with service animals too. On Oct. 18, the organization posted a photo to their Facebook page showing a 5-year-old autistic boy named Kai who had just met his new service dog, Tornado. Kai, who lives abroad with his mom, has been waiting for a service dog for two years.

His mother wrote a heartwarming letter about the moment captured by the photo:

This picture captures the face of a mother who saw her child, who she can't hug, wash, dress, snuggle and touch freely lay on his new Service dog of his own free will, with a purposeful unspoken attachment. This is the face of a mom who has seen her son experience countless failed social interactions on the playground in an attempt to have a friend. Any friend. Any kind of connection. She has sat with her son while he has cried at night for months because he has no consistent connections outside of the family no matter how hard he tries and no matter what he works hard on in his Autism therapies. It doesn't transfer to the natural occurring world for him. And now she is sitting behind her son silently watching this moment, with the air sucked from her lungs, and no words to say. Holding her mouth and silently crying because she doesn't want to distract him from the moment and break him away from a pure, honest, and truly fulfilling moment for her son-of his own free will.

The post has been shared more than 12,000 times on Facebook, and Kai and Tornado's story has captured the internet's hearts. As his mom mentioned, children with autism often have difficulty with touch. Some will never be comfortable being held or hugged, or even holding hands. Autism, a neurological condition that impacts how a person processes the sensory world around them, can make senses like sound and touch very uncomfortable and overstimulating.

While it may be true of human interactions, many children with autism bond exceptionally well with animals. The most famous example being scientist and author Temple Grandin, who has created an entire career around working with cattle. In her memoir, Thinking In Pictures, Grandin beautifully explained what it's like for her to live with autism. In her subsequent books, she's discussed how animals have had an immeasurably positive impact on her life and career, and how we all can learn a lot from having them in our lives, whether we have autism or not.

Service animals are more than just companions for the people they work with: in fact, they're about as far from being a pet as an animal can get. Dogs in particular can be trained to perform tasks for people with physical limitations, help the visually impaired navigate, and even be trained to detect seizure activity in epileptics. As for Kai and his new buddy Tornado, they're about to embark on a journey made richer because they are in each other's lives.

More Like This
Kate Middleton Shares Her Kids' Sweet, Yet Honest Reaction To Seeing Old Photos Of Her
Kids With Head Lice Don't Need To Miss School, AAP Stresses In Updated Guidelines
McDonald's Is Going To Sell Happy Meals Just For Adults So We Never Have To Grow Up
How To Help Families Impacted By Hurricane Ian