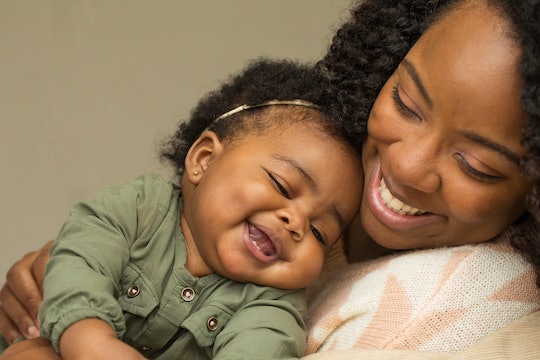 A Mom's Age At Birth May Impact Whether Her Daughter Has Kids, Study Finds

The decision to have kids or not is something that is so personal for all women. Some women just know that becoming a mother is their calling, while others may feel more comfortable taking care of fur babies than little human babies — both of which are completely OK. But a new study might point to some reasoning behind this. As this new research found, a mom's age at birth may impact whether her daughter has kids.

In fact, the older a mother is when she gives birth to her daughter, the less likely it is that her daughter will want to have kids later in life, according to the new study, conducted by researchers at McGill University in Canada. The researchers behind the study, according to Reuters, analyzed data of more than 43,000 women. In this data, they found that daughters who were born to mothers in their mid-20s or 30s were more likely to be childless compared to the daughters of mothers who gave birth between the ages of 20 to 24 years old. The older the mothers got, the less likely their daughters were to have kids of their own.

But, it is incredibly important to note that this study does not explain why this link seems to exists. Although, Dr. Olga Basso, study author, told Reuters that she has an idea about why this could be:

It could be that women who have children at an older age have daughters who are instilled with different behaviors. They might have different ambitions and different plans. ... I was concerned when I saw these findings because I really think women should have children when they're ready as a matter of choice. I don't want people to believe, as a result of this, that they need to have children at 25.

As Basso stated, these findings shouldn't scare women into having kids sooner (or later) than they want. But the study does indicate that the saying "like mother like daughter" is more than an idiom and is actually a self-fulfilling prophecy (just kidding).

Age and maturity do not always rise proportionally and some women in their early 40s may be healthier than their 20-something counterparts, thanks to excellent lifestyle habits. Everything depends on women's health, energy, personality, and perspective on life.

And just because this study indicates there appears to be a correlation between a mom's birth age and her daughter's decision to have kids doesn't mean that anything is set in stone. According to Reuters, the study wasn't able to determine whether a woman decided to not have children because they couldn't or because they just didn't want to, and the study didn't take medical complications into account (which accounts for 10 percent of women in the United States, according to the Office on Women's Health).

Women who've waited to establish their professional career before having kids shouldn't start panicking that they won't get to become grandmothers one day. The fact of the matter is, nowadays, more and more women are waiting to have their first child. A recent report from the Centers for Disease Control and Prevention found that women are now more likely to give birth in their early 30s than in their late 20s — which was the more popular age bracket to start a family for the past 30 years, according to Allure. And the amount of women who give birth past their 40s is rising in the United States, according to CNN, while the amount of teens giving birth is declining, according to Forbes.

Regardless of what this study suggests, women are giving birth at an older age — the numbers prove this. Whether or not the age at which your mom gave birth to you predicts if you'll kids could be possible, but there really are many other factors that will determine this major life decision.