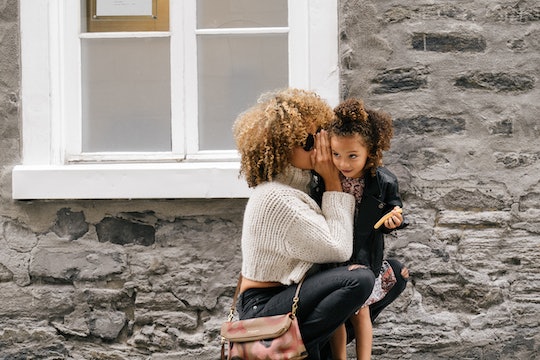 A Mom’s Voice Has Cellular-Level Effects On Her Child’s Brain, According To New Research

Any mom who’s repeated herself 10 times before breakfast will understand the struggle to get a little one — especially a younger child — to listen. Sometimes there’s just too much competition: sleepiness, hunger, excitement about summer break (yay!), what a sibling is up to, what’s on television, or the pull of a really interesting daydream can be tough for any child to overcome. But there’s good news for mothers everywhere: researchers have discovered that a mom’s voice has cellular-level effects on her child’s brain, literally lighting it up in a way that no one else’s can. And the strength of that connection, according to Stanford University researchers, can actually predict how well her child learns to communicate with others.

According to the news release, the study focused on 24 child participants ranging in age from 7 to 12 years old with IQs over 80 and no developmental disorders. Their biological mothers were recorded saying three nonsensical words, which the children heard while undergoing MRI scanning.

Even when researchers played clips that were less than a second long, the children correctly identified their mothers’ voices, according to the release, and the scans showed that their mothers’ voices — and only their mother’s voices — engaged areas of the brain associated with processing auditory, emotional, and reward information.

The idea that babies and children are constantly using information from adults to make sense of the world is nothing new. A University of Washington study published this spring showed that babies use adults’ emotional cues and body language to make judgments about whether or not to play with them. And a separate study from the same institute found that young children use music to learn language skills, applying its rhythmic patterns and tones to the work of unraveling and mimicking adult speech patterns.

But the Stanford study, to be published in this month’s Proceedings of the National Academy of Sciences, is the first time that researchers had explored the potential biological connection between a mother’s voice and a child’s ability to take in social information. In a statement posted online, Stanford psychiatry instructor and lead author of the study, Dr. Daniel Abrams, said that while babies’ preference for their mother’s voice has been well-documented, little was known about the strength or implication of that connection:

Many of our social, language and emotional processes are learned by listening to our mom's voice. But surprisingly little is known about how the brain organizes itself around this very important sound source. We didn't realize that a mother's voice would have such quick access to so many different brain systems.

In an official statement from the Stanford University School of Medicine, professor and study co-author Victor Menon, Ph.D., added that the discovery could have major implications for how scientists approach social communication deficits including autism. He and his team plan to use the Stanford research as a template for designing a new study focusing specifically on children with autism. “Voice is one of the most important social communication cues,” Menon said. “It’s exciting to see that the echo of one’s mother’s voice lives on in so many brain systems.”