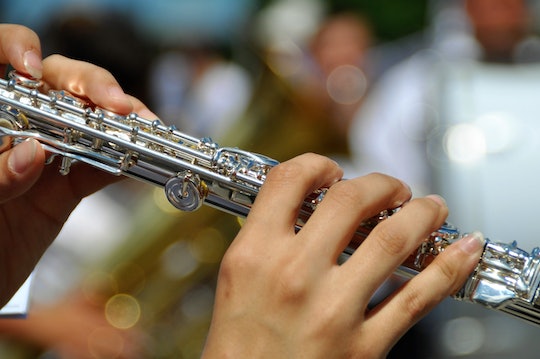 Schoolchildren May Have Been Given Flutes Tainted With Semen, & Wait... What?

There is nothing positive about hearing that children could be in danger. Every day, there are headlines that are a cause for concern, but this recent story might be one of the most upsetting yet. It is so incredibly hard to hear that a music teacher allegedly gave schoolchildren flutes tainted with semen and it isn't something that is pleasant to picture, either.

If you're baffled by this, you're not alone. The flutes in question were made out of PVC pipe and distributed through a program, Flutes Across The World, may have been contaminated with bodily fluids, according to The Washington Post. As Teen Vogue reported, 13 different school districts part of the Los Angeles Unified School District in Southern California received the flutes — but only one district, the Saugus Union School District, according to The Washington Post, reported that the bodily fluid was allegedly semen.

The Los Angeles County Sheriff's Department, Saugus Union School District Superintendent Joan Lucid, and Flutes Across The World founder John Zeretzke have not yet responded to Romper's request for comment.

The flutes were reportedly distributed to kids in different grades by a male music teacher who visited the schools, but was not employed by the school districts, according to The Washington Post. In a statement on its website, the Saugus Union School District detailed exactly what happened:

The individual provided several different assemblies and workshops to many of our schools. At this time, law enforcement is working on workshops where students made "flutes" out of PVC pipe with a specific individual.

The United States Postal Inspection Service, Los Angeles County Sheriff's Department, and California Department of Justice are all currently investigating this, according to an update from the Saugus Union School District.

"We are deeply disturbed by these allegations and remain committed to the safety and well-being of all of our students," The Los Angeles Unified Schools District told Romper in a statement. "We are cooperating with law enforcement in its investigation of allegations of inappropriate sexual conduct involving a musical performer affecting schools in at least 13 school districts across Southern California." The statement continued:

While our records indicate that this individual has never been an employee or registered volunteer in L.A. Unified, we have notified the parents and guardians of the one school that may be involved. We will continue to provide updates to our families as they become available.

According to local Los Angeles CBS affiliate, CBS2 News, authorities have not yet named the suspect and it is not clear what kind of criminal charges he could face, should the allegations be true.

According to updates from the Saugus Union School District, the students were never left unattended with the presenter of the flutes. Still, every parent has the right to feel upset and unnerved, especially with so much uncertainty and questions surrounding these findings. One parent, Tudy Balta, told CBS2 News:

My kids brought these flutes home. They're putting their mouths on it, and they're playing with these instruments. And for someone to contaminate it with their bodily fluids, that's disgusting. My kids could have gotten sick.

So how did parents find out about the bodily fluids in the flutes? According to CBS2 News, the superintendent of another affected school had sent a letter to parents explaining what had happened. But according to The Washington Post, it is still unclear what prompted the investigation or how people began to suspect the flutes were contaminated.

This is probably why federal investigators want to test all the flutes in question, according to NBC Los Angeles. And parents in some school districts are being urged to put the flutes in paper bags and drop them off with police, according to the Associated Press. As The Signal reported, the Saugus Union School District is working with law enforcement to "determine the most efficient way to collect the flutes as evidence, and to gauge the extent to which students have been affected."

Because there is so much that people don't know — like how the fluids were first spotted, how they were identified, and what triggered parents to investigate the flutes — there is only so much that can be said, and so much to be found out.

Indeed, it is unnerving to know that there is a lot that is still to be determined, especially for the parents and their children who attend these schools. But every parent knows that their school district or their child's teacher would never purposefully put them in harms way. After how scary this is, it is certain that a situation like this will more than likely never happen again, especially in Southern California schools.