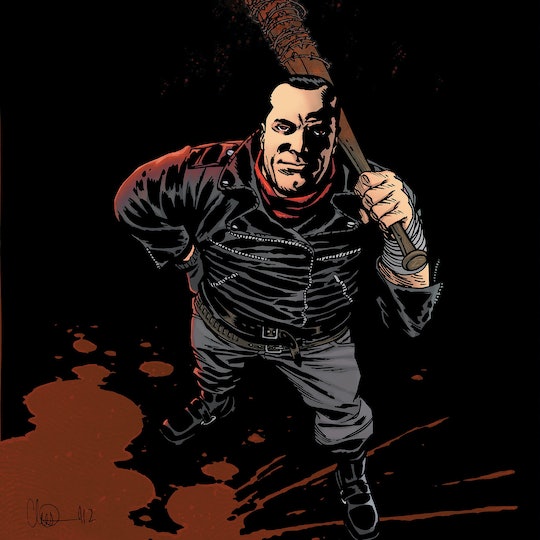 The Season 6 finale of The Walking Dead is a week away, which means viewers of the AMC series will finally get to meet the most feared villain of the franchise and Rick's arch nemesis, Negan. Up to this point, all fans know about the new baddie is that he's the leader of another group known as The Saviors, and that he is not someone you want to mess with. And a Negan Easter egg on The Walking Dead tonight proved why you don't want to get on this guy's even badder side.

Early in the episode viewers see Carl walking through the armory, where all the weapons and ammo are stored. During his stroll through the pistol aisle, he comes across a Springfield .45 with an etching in the grip. If you were too busy tweeting about Carl's missing eye, you probably wouldn't have noticed the carving. But those who paid attention could spot what looks like a string-wrapped bat.

Now to those who only watch the series, this may not mean anything other than the gun's previous owner had a knack for art. But for viewers who also read the comic books (or in my case, viewers who date someone who reads the comic books), this was much more than a doodle. It was an ode to Negan's weapon — a barbed wire covered bat named Lucille.

Though this is the first time viewers have seen physical evidence of Negan's vampire bat — a term gifted to the weapon because it "loves the taste of blood" — we have witnessed the damage she can cause. In Episode 12, "Not Tomorrow Yet," Rick's group breaks into The Saviors' lair in an attempt to take them down. During the attack, Glenn comes across a wall of what one presumes to be victims, all of whom have their heads bashed in.

There have also been a few other instances involving bats. Almost a year ago, a Season 5 finale promo showed Glenn holding a wooden bat. Also in Season 5 mid-season premier, "What Happened and What's Going On," there is a scene in which Glenn enters Noah's community holding a bat. And if you look even further back to the first episode of Season 5, "No Sanctuary," Glenn almost dies when the members of Terminus try to hit him with a baseball bat.

So what's with all the bats, and why is Glenn always near them? It's not a love of baseball. According to Wet Paint, many believe Glenn's use of bats foreshadows his death by Negan. Though viewers may think this is impossible, readers of the comic books would like to remind you that — spoiler alert — Negan kills Glenn in the comics by bashing his head in with Lucille.

Will the series stay true to the comics, or is this all a red herring to surprise fans during the season finale? Well, you'll have to tune in to the 90-minute Season 6 finale next week on AMC.