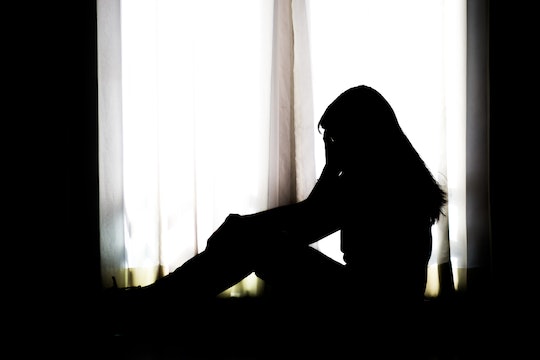 Doctors May Now Be Able To Predict Your Risk Of Miscarriage...Using Your Blood

When a woman first finds out she is pregnant, she may be tempted to immediately start brainstorming baby names, decorating the nursery, and excitedly daydream about the day the newborn will finally arrive. But there also may be an element of uncertainty. A gnawing, stomach-churning worry that something could go wrong. Well, a new blood test could predict a woman's risk of miscarriage as well as other pregnancy complications. Although the research is preliminary and requires further studies in order to be used in practice, scientists believe that this potential breakthrough could help prepare women for tough eventualities, like miscarriages, and get them care earlier so they can address other relatively common problems sooner.

According to the BBC, a team from the Laboratory for Reproductive Medicine and Immunology in San Francisco analyzed 160 pregnancies from four existing studies to conclude that certain blood molecules can predict future issues that could crop up further down the line. In addition to miscarriages, these include premature births and preeclampsia. Preeclampsia is a potentially fatal condition that causes the mother's blood pressure to skyrocket to dangerous levels, according to the Mayo Clinic. It can also have serious effects on the baby, such as oxygen deprivation and low birth weight.

In short, the blood tests that the Laboratory for Reproductive Medicine and Immunology is proposing would screen for microRNA in red blood cells in the placental bed. This could happen during the first three months of pregnancy.

The results of the tests were promising. The scientists reported that they were able to predict both miscarriages and preeclampsia with 90 percent accuracy before any symptoms for either were ever detected, HuffPost reported. As for premature births, the researchers were able to predict those that occurred before 34 weeks accurately 89 percent of the time, and those between 34 and 38 weeks 92 percent of the time, according to HuffPost.

Still, it may be quite some time until the blood test is a reality. Honorary professor of clinical embryology and stem cell biology at the University of Manchester Daniel Brison told the BBC that there is "high risk of [the results] being wrong" and that follow-up studies to verify the results will be essential. In any case, the prospect of using a simple blood test could help women address any potential problems with their pregnancy, and that is undoubtedly an enticing one.

It's important to recognize just how helpful this innovation would be, as well as its limitations. According to The Telegraph, the blood test could make a huge difference for — and even save the lives of — babies who are at risk for premature birth and who have mothers who are more likely to get preeclampsia. If doctors are able to detect that a baby may be premature, they can may be able to give the mother hormonal drugs to mitigate the likelihood of that happening, the outlet noted. And if they know in advance that a woman may get preeclampsia down the line, they will be in a better position to monitor and treat her accordingly.

On the other hand, The Telegraph noted, there isn't much that medical professionals can do to prevent a miscarriage, even if they are forewarned about the possibility. But knowing what could be in store may still very well help pregnant women and their families prepare themselves and seek the appropriate medical attention they need.

According to the American Pregnancy Association, anywhere from 10 to 25 percent of "all clinically recognized pregnancies will end in miscarriage" and preeclampsia is the most common complication to occur during pregnancy, as Medical News Today noted. So it's encouraging to see such strides being made in the realm of predicting pregnancy problems and complications. And hopefully, in the future, new innovations will be able to eradicate them completely.