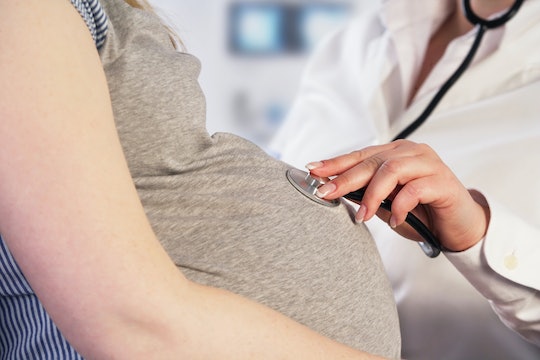 This New Blood Test Could Predict Your Due Date & Risk Of Premature Birth, Study Says

Accurately predicting an expectant mother's due date is pretty important because there's not a lot of room for guess work when it comes to babies. Having an accurate due date means parents can be prepared and doctors can plan accordingly whenever babies are born prematurely. In efforts to make the process simpler, scientists have developed a new blood test to predict pregnancy due dates and potential for preterm birth.

A preliminary study published in Science and led by Stephen Quake at Stanford University involved using small numbers of women to develop the inexpensive blood test. The test works by detecting change in RNA (ribonucleic acid) circulating in a pregnant woman's blood. Not only was the test able to predict a woman's due date, but scientists found it could possibly identify women who are at risk of giving birth prematurely, according to Science magazine.

The study was co-led by Dr. Mads Melbye, who runs the Statens Serum Institute in Denmark. Researchers analyzed the blood of 31 Danish women taken every week throughout their pregnancies, which were all full term. The Seattle Times reported that researchers studied genes linked to the placenta, maternal immune system, and the fetal liver. They found that nine of those genes produce RNA signals that change as the pregnancy progresses.

Being able to measure the potential for preterm birth at the beginning of a pregnancy could have significant impact. According to the Healthy Newborn Network, 15 million babies worldwide are born prematurely each year and premature birth has become the leading cause of newborn deaths worldwide. Although it might be easy to brush off the issue as only affecting lower-income countries, the United States is no exception. As noted by the March of Dimes, premature birth (before 37 weeks of pregnancy) is the leading cause of newborn death in the United States.

"RNA is what's happening in the cells at any given moment," Quake said, according to The Seattle Times, "We had this idea that we could make a molecular clock to see how these things change over time and it should allow you to measure gestational age and see where things are in pregnancy."

By analyzing the blood of women who delivered prematurely, researchers identified seven other genes with RNA signals that seemed to point to preterm birth. Although the current study points towards the need for a larger clinical trial, other experts have noted the need for diversity within the trial.

Dr. Diana Bianchi, director of the Eunice Kennedy Shriver National Institute of Child Health and Human Development, noted, according to The Seattle Times, the genes for estimating gestational age were identified using healthy white Danish women with full-term pregnancies. On the other hand, the women involved in the preterm birth analysis were African American.

In addition to the problem of race, there are more factors involved in preterm births than what the initial study covered. In the first study, researchers were only working with women who either had past history of preterm births or those already experiencing preterm contractions.

Premature delivery can be triggered by genetic factors, but it can also be caused by other health factors. Heathline reported some of those causes can include antepartum hemorrhage (bleeding during pregnancy), weak cervix, or hypertensive disorders of pregnancy.

Right now, the initial study has opened new doors of conversation when it comes to looking at both due dates and premature births. But, as a preliminary study, it is not perfect. Moving forward, it's up to researchers to broaden their scope in additional trials. Hopefully, then, this test can be beneficial to all the mothers who need it.