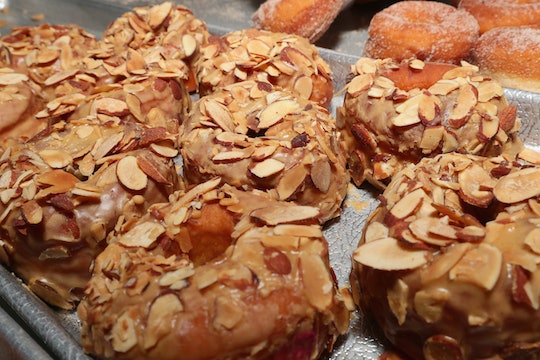 A New Vaccine For Celiac Disease Could Bring Hope To Sufferers

Practically everyone knows the feeling of looking longingly at a piece of bread but knowing they shouldn’t have it. But that feeling is very different for the subset of the population with diagnosed celiac disease, for whom any splurge on gluten could have painful, debilitating results. But now, a new celiac disease vaccine could be good news for those suffering with the condition.

The new treatment is called Nexvax2 and is produced by ImmusanT, a Massachusetts-based company, according to People. The vaccine passed phase one testing in 2011 and is currently gearing up for phase two testing across Australia, New Zealand, and the United States, the outlet reported.

The vaccine isn’t intended to be a quick fix — and it won't be — but rather is a type of immunotherapy, according to BeyondCeliac.org. It helps the body build up resistance to the protein in gluten that causes reactions, and is administered over a period of time. The treatment also isn’t targeted at those who choose a gluten-free lifestyle as a personal choice, but is meant for those with celiac disease. Researcher and gastroenterologist Dr. Jason Tye-Din of the Royal Melbourne Hospital told the Sydney Morning Herald, “The vaccine is designed to target the 90 percent of celiac disease patients with the HLA-DQ2 genetic form of the disease. A successful therapy that can restore normal gluten tolerance would revolutionize celiac disease management.”

Celiac disease is much more than intolerance to gluten. It’s an autoimmune disease that causes the small intestine to react when it sees gluten, according to Newsweek. The resulting damage to the small intestine prevents the sufferer from absorbing nutrients when they eat, the outlet reported. That can result in nutrient deficiency and malnutrition.

Common symptoms of celiac disease include bloating, weight loss, and diarrhea, according to Healthline. In the United States it affects about one in 133 people, which adds up to about 3 million Americans, according to the University of Chicago.

The team studying this new drug hope to include about 150 people in their study, Newsweek reported. The web page for the study on the website for the Royal Melbourne Hospital says they’re looking for people between 18 and 70 years old who are willing to consume a "moderate amount of gluten." The participant have gene HLA-DQ2 and can be tested if they do not know.

The trial will ask participants to inject themselves with the drug, so an unwillingness to perform these injections is listed as exclusionary. Women who are lactating or pregnant are also out, as well as anyone with a history of inflammatory bowel disease or microscopic colitis. Participants will be asked to do injections twice a week, consume some amount of gluten, and record information about how they respond. Details will also be gathered through blood samples, and monitoring vital signs, according to the site.

Nobody wants to give themselves twice-weekly shots, but those who choose to just may be part of ushering in the next big breakthrough for people suffering with celiac disease.