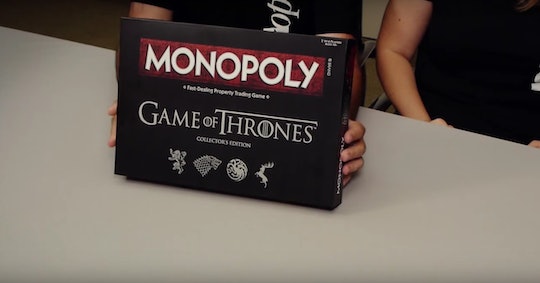 A New 'Game Of Thrones' Monopoly Set Is Coming, Along With Winter

Look, it's been, like, years since GOT fans have had much that's new to talk about. I'm dyin' over here, people! Luckily, the Hasbro Company has a solution in releasing a new Game of Thrones edition of Monopoly — maybe that will tide desperate viewers over for a bit. According to PopSugar, Hasbro partnered with HBO to really create a new version of the popular board game that feels authentic to the GOT storyline. That's enough to raise your banner this holiday season.

As explained on YouTube's USAopoly site, Boardwalk and Park Place, typically the most expensive real estate on the classic Monopoly board, have been replaced by King's Landing, the capital and arguably the New York City of the Seven Kingdoms, and Braavos, the sort of Monaco-meets-Mykonos "Free City" where Arya Stark learned to bend space and time from the Faceless Man. Good call, Hasbro.

Meanwhile, if you land on the "Hand of the King" space, that means you're paying a fistful of dollars to the tax collector. Witty. Maybe just enough for fans to bend the knee to the creators. Instead of the usual "house" and "hotel" game pieces you can collect, GOT Monopoly users get to differentiate between "Villages" and "Keeps" to collect, in keeping with the show's pseudo-Medieval feel.

Also, the typical Monopoly money has been swapped for bills made by the series' Iron Bank featuring the symbols of such dynasties as the House of Westeros.

And don't forget about the all-important tokens to be moved along the board, with the six different kinds here representing such central-to-the-show images as a crown; a White Walker; a three-eyed raven; a direwolf; a dragon egg and, natch, the Iron Throne.

And, perhaps most atmospheric of all: The classic Game of Thrones theme song plays from an Iron Throne-shaped card holder, PopSugar added, making it the first time Monopoly has featured music.

As PopSugar added, the Game of Thrones Monopoly set will be available in retail stores beginning in January 2019 (giving you plenty of time to play before HBO finally, finally premieres the show's eighth and final season, gulp). However, super-fans can order it now from Amazon for $36.

Fans who just can't wait to see how the story of Daenerys "Stormborn" Targaryen and the other possible inheritors to rule all Seven Kingdoms wraps up can at least know there is at least one other person besides the actors and crew who knows how the whole saga ends.

Actress Amanda Peet, married to series co-creator Daniel Benioff, admitted nervously on Late Night with Seth Meyers that she knows the specifics of the finale's plot. Naturally, she said she couldn't divulge anything about the closely-guarded secrets behind the international sci-fi hit.

And while fans don't know yet which monarch will prevail in the end (please, let it be "Mother of Dragons"), you can at least get a jump on things with this game. Remember, winter is coming: You'll need something to occupy yourself as the storm rages outside. Sorry, I get a bit carried away when it comes to this show, and I know that I'm not the only one.