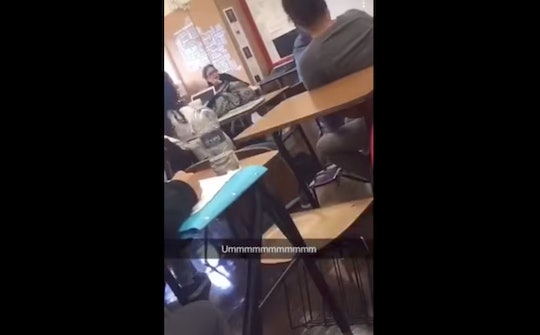 Part of the American Dream is a blending of cultures and languages from all over the world. Nearly two decades into the 21st century, one would hope that this has been accepted as a positive thing. Unfortunately that is not always the case. Channeling her inner Sarah Palin, a New Jersey teacher told students to "speak American," according to a student's cellphone recording of the incident. Her comments have since sparked a telling debate on whether there is one single dominant language that should be spoken in the United States.

This incident reportedly took place at Cliffside Park High School last Thursday when the teacher in question overheard several students conversing in Spanish, according to The Root. Apparently outraged, the still-unidentified teacher can be overheard on the phone recording saying:

Shortly after making her comments, the teacher found herself going viral. A student in the class recorded 25-second video clip and later shared across social media, according to PIX 11. Many students in the class were appropriately outraged by the comments and some even walked out of the class in response, as NBC News reported. A group of students even staged a protest outside of the school, according to NJ.com. Romper has reached out to Cliffside High School for comment, but has not heard back at this time.

Junior Vianery Cabrera, who was involved in the incident, has attended Cliffside Park High School since she came to the United States from the Dominican Republic three years ago, according to NBC News. Cabrera told the outlet that she was simply chatting with her friends when the teacher made the comments recorded in the video. "We were speaking about the Yankees in Spanish, because that's how we feel more comfortable," Cabrera told NBC News, adding that she initially "laughed" at the teacher's comments because "American" is not a language.

According to NBC News, the student went on to say:

Katherine Kulick, Program Director for TESOL (Teaching English to Speakers of Other Languages) Minor and Associate Professor of French and Francophone Studies at the College of William and Mary told Romper that students whose first language is something other than English will often communicate in their native tongue with peers. She believes that the teacher’s reaction in the video "stems from a lack of understanding or valuing of other languages and cultures." Additionally, Kulick says the teacher's comments are contrary to the sort of environment that instructors should aim to create:

Multilingualism is to be encouraged – both learning new languages as well as valuing the native languages of others. As educators, we are preparing students to be successful in an increasingly interconnected world. Such a world requires the ability to communicate successfully, and respectfully with one if we are to meet the interdependent economic, health and environmental challenges that we all face.

Other students in the class responded to the teacher's statement as well. One can be heard in the background saying, “You’re being racist. I know how to speak English.” Though at least one student walks out of the class on camera, PIX 11 reported that several Spanish-speaking students left the class. Alana Lopez, a freshman at the school, told the news station, "It's really disrespectful. That’s not right. You don’t do that."

Numerous people on Twitter have pointed out the obvious flaw in the teacher's logic. As Cabrera also stated, "American" is not a language. In fact, according to the CIA, the United States has no official language, meaning that the definition of "speaking American" is up for debate.

What's more, a 2013 census reported nearly 400 languages are spoken within the United States and — you guessed it — Spanish is one of the most common languages. Further complicating the issue, the New York Daily News reported that 30 percent of the Cliff Side community speaks Spanish. NBC News reported an even higher number within the student body specifically, with nearly half of the student body — 49.7 percent — reporting speaking Spanish at home and 62 percent identifying as Hispanic or Latino.

While some on Twitter were quick to point out that the teacher's comments were inappropriate, others simply mirrored her sentiments and jumped to her defense. Some tweets suggested that the students needed to learn English, though those users were ignoring the fact that these students are apparently bilingual and have since given interviews in fluent English.

The Cliffside Park School District board reportedly met for over an hour on Monday to discuss what actions to take on the issue, according to the New York Daily News. Superintendent Michael Romagnino told the outlet:

It’s a personnel matter at this time. We’re taking this under consideration. The parents can be assured we’re addressing it.

It is unclear at this time what consequences the unnamed teacher will face, but one can only hope that this sort of cultural homogenization won't be swept under the rug.