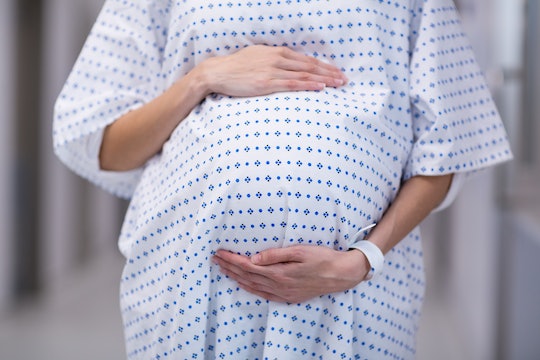 Study: This New Pain Relief Drug Could Reduce The Need For Epidurals During Childbirth

Childbirth is painful — that is a fact the medical field has done their best to navigate around, searching for pain relief methods suitable for labor. Although epidurals and pain medications exist, they can definitely stand to be improved upon. Now, a recent study has found that a new pain relief drug could reduce the need for epidurals during childbirth.

Currently, pethidine is the most commonly used pain relief drug during labor, according to the The Independent, which noted that, in the United Kingdom, pethidine is given to more than a quarter of a million women in labor each year — those numbers increase worldwide. However, something being common doesn't necessarily guarantee that it's the best.

In a new study — originally published in The Lancet, according to Eureka Alert — researchers examined the benefits of a different pain medication called remifentanil, which is rarely offered during labor now. Researchers were motivated to pursue new avenues for pain relief due to simply pethidine not always cutting it, according to The Independent. When the first avenue for pain relief is inadequate, many laboring women have no choice but to turn to epidurals. Remifentanil is an opioid pain medicine, typically used to treat or prevent acute pain after surgery and it is typically given as an injection.

By examining 400 women over the age of 16 years who were giving birth after 16 weeks and requesting opioid pain relief, researchers came away with some pretty impressive results. Remifentanil actually halved the number of women requesting epidurals, according to The Independent.

An epidural is a pain relieving injection that goes into the "epidural space," located right outside of the membrane protecting your spinal cord. The most common type of epidural, as noted by WebMD, is the nerve block. Essentially, it's a form of anesthesia given by doctors to numb spinal nerves and prevent pain signals from traveling to your brain.

Epidurals have their benefits, but of course carry their own risks as well. As outlined by the Mayo Clinic, some side effects of an epidural include: decrease in blood pressure, which can slow a baby's heart rate; fever or itchiness; postpartum back pain; and you are likely unable to walk during labor.

"Previous studies have shown that at least one in three women given pethidine to manage pain during labour require a subsequent epidural as the drug is not always effective," Dr. Matthew Wilson, lead author of the study explained in a press release for the research.

During the trial, half of the women involved were given remifentanil during labor, according to Science Daily. They were able to administer the pain relief themselves by pressing a hand held device. The other half, given pethidine, were administered injections up to every four hours.

In addition, all women in the trial received one-to-one care from a midwife, according to Science Daily. Their breathing rates, sedation, pain ratings, and oxygens levels were checked every 30 minutes, as Science Daily reported. Throughout the trial, as noted by Science Daily, women could request an epidural at any time, and the other forms of pain relief were halted if one was given.

At the end, as broken down by The Independent, about 19 percent of women in the remifentanil group went on to have an epidural — compared to 41 percent in the pethidine group. In addition, Science Daily noted that women in the remifentanil group were less likely to need forceps and vacuum during labor, at 15 percent compared to the pethidine group's 26 percent.

The only concern now is remifentanil was associated with twice as many mothers having low oxygens levels than pethidine (14 percent compared to 5 percent), according to Science Daily. However, as the research noted, this didn't have any negative effects for the mother or baby.

Researchers still need further studies to fully look into the benefits and possible risks associated with remifentanil. But, for now, the study's findings suggests positive growth in the future. There's no way to completely eliminate pain from the birthing process but, hopefully, the methods for pain relief will continue to improve.