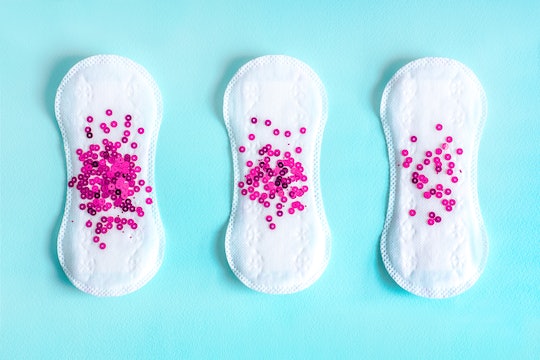 There's Finally Going To Be A Period Emoji

A woman's period is often a taboo topic that doesn't get discussed a lot in everyday conversations. Yes, it's 2019, but people still have a long way to go when it comes to de-stigmatizing something that is so natural (and common). And what better platform to help normalize menstruation than a smart phone, really? A new period emoji is coming to your keyboard this year and it's about time.

Unicode, the company responsible for bringing all those fun emojis to your keyboard, approved the red blood drop emoji after 55,000 people signed a petition from Plan International UK to include it in the rollout of the new emojis, Time reported. The idea came from the need to educate young girls about their bodies and normalize the conversation around the process, Time added.

People on Twitter are applauding its inclusion, using the hashtag #endperiodshame. If you've ever hidden a tampon in your sleeve on the way to the bathroom, or muffled the sounds of opening a plastic pad wrapper, then you know all about period shame. And there's nothing to be ashamed of when it comes to our bodies.

"The inclusion of an emoji which can express what 800 million women around the world are experiencing every month is a huge step towards normalizing periods and smashing the stigma which surrounds them," Lucy Russell, the head of girls' rights and youth at Plan International UK said in a statement, according to The Independent.

And it's about time people use the word "period," "menstrual cycle," or "menstruation," instead of Aunt Flow, shark week, or code red. In fact there are over 5,000 alternative names for the period around the world, according to Cosmopolitan.

"For years we’ve obsessively silenced and euphemized periods. As experts in girls’ rights, we know that this has a negative impact on girls; girls feel embarrassed to talk about their periods, they’re missing out, and they can suffer health implications as a consequence," Russell added in the statement.

And while a period emoji can't solve all of these problems, it's a step in the right direction.

Unicode Consortium will also release a slew of new emojis throughout the year including a yawning face, mechanical arm, waffle, melting ice and more, according to the Unicode blog. Their release dates will vary by platform. Platforms include operating systems (iOS, Android, Windows), apps (WhatsApp), and web platforms (Twitter, Facebook).

The period emoji is expected to hit keyboards this spring, according to Elle.

The red blood droplet is just one of many so called "femojis" or women-centric emojis that are joining the ranks of the winking face, eggplant, and other often-used emojis. The purpose? To normalize womanhood. Example? A breastfeeding emoji was added to the lineup recently as well, according to Parents.

It goes way back to 2016 when nearly 40,000 people signed a petition to bring female-related emojis to keyboards across various platforms, according to Mashable. Considering that, at any given time around the world, 300 million women could be on their period, according to a "femoji" petition on Change.org.

And given that only 32 percent of American women feel comfortable talking about their period with male classmates or coworkers is reason enough to act, no matter how small the gesture.

So, will women make good use of the period emoji? Only time will tell. Until then, start thinking about all the ways you'll use the little red droplet in various text conversations and more. The possibilities are practically endless.