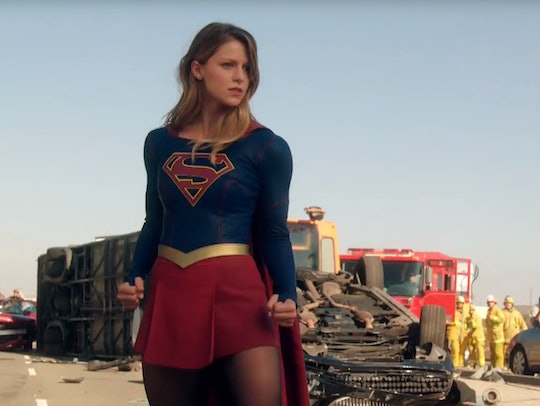 A New 'Supergirl' Movie Is Reportedly In Development, So Start Working On Those Costumes Now

Move over boys, there’s a new superheroine in town. Well, she’s not new, per se, but she’s going to be new to this age of superhero superiority. As Entertainment Weekly reported, a brand new Supergirl movie is in development and it feels like people in Hollywood are finally beginning to listen to the cries for more inclusivity in genre entertainment.

If anyone was going to listen, it would make sense that it would be DC and Warner Bros., the companies that were visionary enough to see the perfect Wonder Woman in Gal Gadot. While Marvel may be the name that is more commonly associated with the current glut of comic book-based media, it is DC that has shown itself to quite diverse in its character choices and how they portray them. While, granted, DC has only one movie in its recent comic era that’s anchored by a woman, consider that Marvel has had more than 20 films, according to IMDb, and until this year’s Ant Man and the Wasp, none of them had a female anchor. (Avengers' Black Widow doesn't count, since she’s arguably a supporting role.) Marvel does have the female-led Captain Marvel coming up in 2019, according to the publishing company's website.

Entertainment Weekly reported that Oren Uziel, who wrote 22 Jump Street and the upcoming Sonic the Hedgehog and Mortal Kombat, will be the writer for the new Supergirl, though no other details have been revealed.

Deadline did point out that there are rumors that DC would like to give the Superman franchise a makeover, so this may be a good jumping off point to reboot that series. In this case, Supergirl could be just the woman Superman needs. She’s his cousin, according to Entertainment Weekly, and also comes from Krypton, so she has similar powers. Though she’s reportedly older than Superman, she was stuck for some period of time in the “phantom zone” so arrived on Earth well after Clark Kent had grown up, according to Consequence of Sound.

The character first appeared in comics in 1959 and, until the recent CW series has only starred on screen once in 1984 starring Helen Slater, according to Entertainment Weekly.

CBS gave Supergirl another shot in 2016, with a small-screen version starring Melissa Benoist, according to Variety. For its second season, the show moved to the CW, who kind of have an "in" with the comic-fan audience; the network also airs Arrow, The Flash, Black Lightning, and Legends of Tomorrow. Three years in, Supergirl is still telling great, female-focused, socially-astute narratives, according to The Daily Beast.

Last summer, Wonder Woman roared into theaters and came away with an $821 million haul, according to Box Office Mojo. That put it at 24th on the list of domestic box-office receipts, with seven superhero movies ahead of it. It’s more than enough to prove that a woman heroine can perform at the box office, but perhaps more important was the cultural commentary that arrived with Wonder Woman. Here was a woman who was complex, layered, flawed, and — particularly among the world of comic heroines — unsexualized. She showed that skintight latex and assassin kicks aren’t what it takes to get men to show up to see a woman lead a comic movie, and along the way she made female viewers feel seen.

She may have done even more than we realized though. Perhaps she’s brought about a new era, when not only female dollars are considered, but so are the strength of the stories we tell about women. If that’s the case, one can only hope for more good news as time goes by. But that might be looking too far down the road. Today, let’s just enjoy the news that another solid, smart woman is on her way to the big screen.