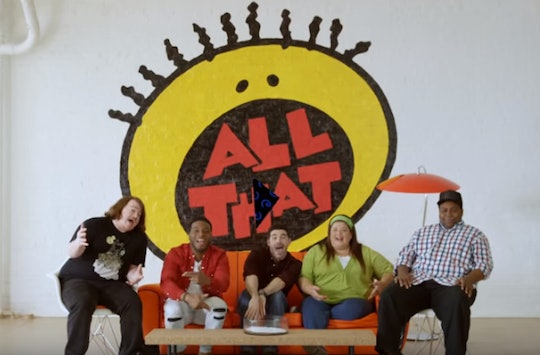 For kids growing up in the '90s, there wasn’t much that could beat Nickelodeon on Saturday nights. From 8 to 10 p.m., American tweens (were tweens even a thing back then?) could unwind with an uninterrupted block of television that made a text-free life actually pretty bearable. Those were the days. Well, E! News is reporting some exciting news for Snick fans: Nickelodeon is bringing back the big orange couch one more time because a Nickelodeon All That reunion is happening, people!

If Snick was Nickelodeon’s equivalent of Saturday night Must-See TV, All That was basically Saturday Night Live. The family-friendly sketch comedy show ran on Nickelodeon from 1994 to 2005 and helped launch the careers of a number of young stars including Amanda Bynes, Gabriel Iglesias, Jamie Lynn Spears, and Nick Cannon. And according to E! News, the network announced plans to celebrate the 22nd anniversary of the show’s premiere episode by bringing original cast members Danny Tamberelli, Kel Mitchell, Josh Server, Lori Beth Denberg, and Kenan Thompson back on April 16 and 17 for an epic All That marathon weekend.

Not only is Nickelodeon bringing back some of the best episodes from All That, but, according to the report, the cast will appear in taped one- to three-minute reunion clips throughout the weekend where they’ll talk about some of the show’s funniest moments and their best memories from their days on set.

In the 11 years since the show’s been on the air, fans have had a few quick moments of nostalgia with some of the biggest names from the original cast. The entire All That crew spoke at Comic-Con in New York last fall, according to a separate E! News report. And earlier last year, Mitchell and Thompson appeared on the Jimmy Fallon Show for one more “Good Burger” sketch, and fans were seriously excited. But, I mean, who couldn’t get excited at hearing everyone’s favorite fast food manager Ed say that classic line one more time: Welcome to Good Burger, home of the Good Burger. Can I take your order?

Oh my gosh, my childhood! Nickelodeon has been making quite a few trips back to the '90s recently. According to Variety, fans will soon see a Legends of the Hidden Temple movie and a full-length Hey Arnold! movie on the small screen. And if that isn't enough to get you excited about heading back to the good ‘ol days of Snick, take a look at this promo for the reunion featuring some of the best-known clips from this hilariously odd and talented crew.

So, fans should plan to pretty much clear their calendars on April 16 and 17. Sound good?