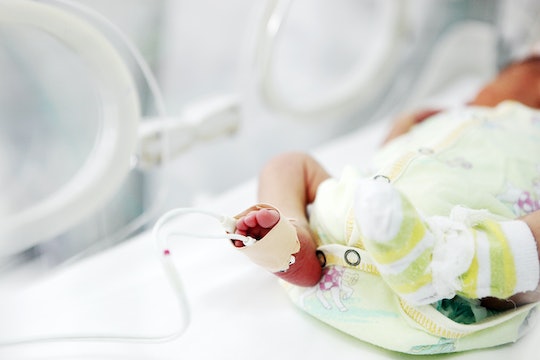 Researchers have tried to get to the bottom of racial disparities within medical care for years, specifically how adults are impacted, but a new review of studies published in Pediatrics suggests babies' health and medical outcomes are at risk as well. In fact, according to the new research, a NICU baby's chance of survival and overall health outcomes may depend on their skin color, as researchers found infants born to minority mothers receive "unequal" care in the neonatal intensive care unit, or NICU, leading to higher neonatal mortality rates.

Factors such as preterm birth and low birth weight are some of the leading causes of death among African American infants, according to the Office of Minority Health Resource Center, and data from the U.S. Centers for Disease Control and Prevention (CDC) shows that black mothers are 50 percent more likely to have preterm births than white mothers, which is why researchers set out to learn more about the medical care they receive in the moments after they’re born. To reach their findings, researchers from the the American Academy of Pediatrics (AAP) reviewed more than 560 studies, and found several disparities in care.

For example, researchers found that, compared to white babies, black babies had a “two-fold greater risk” of dying from intraventricular hemorrhage, bleeding in the brain that’s common in premature infants with very low birthweight, according to Stanford Children’s Health. Additionally, researchers found that neonatal mortality rates were higher “in hospitals in which most very low birthweight infants were black.”

These disparities may be linked to the researchers’ findings that “minority-serving” hospitals had “significantly higher” neonatal mortality rates. Mothers and infants at such hospitals, according to the study, received 50 percent less care and experienced a "significantly higher" patient-to-nurse ratio.

What’s more, according to the AAP's research, African American mothers reported in the study that they received "limited breastfeeding education and support during pregnancy, childbirth, NICU stays, postpartum, and recovery in the community." Another disparity researchers found was that black and Hispanic mothers were less likely to receive referrals for follow-up appointments after discharge.

As Dr. Jochen Profit, senior researcher for the study and an associate professor of pediatrics at Stanford University, in California, explained to U.S. News & World Report, many of these problems can be attributed to a lack of resources and qualified staffing. “Infants of color, especially black and Hispanic infants, are more likely to receive care in quality-challenged hospitals," the authors wrote of their findings, adding that "improving hospital processes" could be key fixing these grave and serious issues.

“Researchers are now looking at chronic stress caused by societal, institutional or interpersonal racism as causal factors for preterm birth and this review suggests that these factors are also causal factors for racial/ethnic disparities in NICU quality of care,” the authors wrote in their study. “Targeted quality improvement efforts hold promise for improving racial/ethnic equity in care delivery.”

Maria Trent, M.D., M.P.H., Johns Hopkins University in Baltimore echoed this sentiment, telling Physicians Weekly: "A combination of strategies will be needed to begin untangling the thread of racism throughout the fabric of our society, and to improve the health of all children."

In addition to more research targeted at addressing these disparities, legislation tackling these problems is also necessary. In May of last year, for instance, California Rep. Barbara Lee (D-CA) introduced the Health Equity and Accountability Act to "programs and requirements relating to the health of minority populations, including provisions to improve data collection, health literacy, health workforce diversity, and overall access to health care," according to the bill's language. It's still under review, but it is an important step in making progress.

In the meantime, the National Conference of State Legislatures are also working to identify strategies by increasing workforce diversity within the hospital setting, improving cultural competence in health care services and addressing the social determinants of overall patient health, according to the organization's website.

While it will take time for health care disparities for minorities to become a thing of the past, there are people working to identify and address these serious issues. And research such as this is invaluable in getting there.