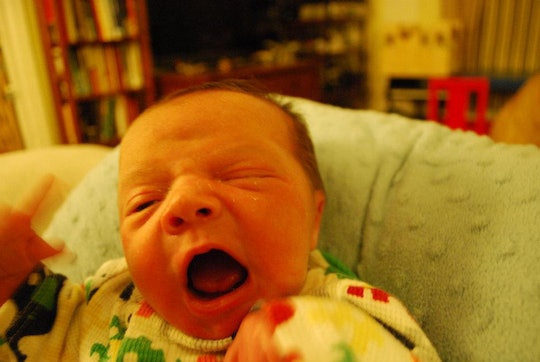 A Nurse Ruined My Golden Hour

When I gave birth to my son August, my labor was fairly short. At 6 p.m., I was eating Chinese food at 6 p.m. By 7 p.m., my contractions were five minutes apart. They dragged me to the hospital at 8 p.m., where I amazed the staff with my composure as my contractions increased in duration and intensity. Then I went into transition, and started screaming at the top of my lungs.

The doctor was late. She wouldn’t show. I wanted to push. The nurses started to panic. As they inserted the epidural, I pushed hard, and my water broke all over the face of a nurse. August was born two pushes later.

August was the typical newborn: bluish, wet, squalling. He had to cry for a while before he got pinker, but he latched on quickly and nursed. They covered us with a blanket. I began to shake - a physiologically normal postpartum response. Then the nurse insisted that August needed to be warmed up.

“No,” I said, determined to hold onto my golden hour, or the hour after a baby is born. “He’ll get warmer more quickly on me.” But she wouldn't listen.

I argued. I pled. But it didn't do any good. My son was lifted from my warm, soft breast and inserted him into an incubator. The doctor was stitching me up, so I couldn’t move over to hold his hand or stroke his belly. I was left wondering what he was doing, what he was looking at. I tried to remember the color of the eyes under his shock of black hair. Was he lying quietly, or waving his arms and legs? Did he miss me?

And over and over, the nurse said no.

My husband held his hand and tried to narrate what he was doing. But it wasn’t the same. I was near tears. I wanted my baby. Finally, they lifted him out, swaddled him up, and handed him to me. I promptly un-swaddled him, burrowed him under the covers with his little head sticking out, and latched him back onto my breast. He nursed happily. The doctor continued stitching. I had had a bad tear. The nurse hovered in the corner of the room, near the incubator.

When he unlatched, we swaddled him up and passed him around. The doctor said goodbye and left; I never saw her again. Our friend, a former public health nurse, took pictures of my husband holding August all swaddled up. Then she un-swaddled him and, as a nurse, went through a series of reflex exercises designed to test whether he was neurotypically normal. I wasn’t too thrilled at my baby being un-swaddled and put through his paces, especially when he should be at my breast, but I lived with it because I loved my friend, who had just supported me through a hard labor.

It didn’t help that we had refused eye ointment and Hepatitis B shots (which our epidemiologist friend said was given just to assure universal immunity), giving the nurse nothing much to do. We didn’t need help with breastfeeding. We didn’t have baby questions. We didn’t engage her in conversation, because this was our time as a family, and we didn’t want it interrupted.

About half an hour after I gave birth, my husband, who is unflinchingly polite, asked the nurse if she had to stick around until we were done. “Yes,” she said. “But take all the time you need.” She might as well have rolled her eyes. She clearly had other things to do than watch us coo over August.

And so my golden hour ended. They wheeled us out, me shaking in a wheelchair, August in an incubator. After all of the interruptions, that one perfect hour after birth had ended. We would never get it back. Five years later, I’m still angry at that foot-tapping nurse. I wanted all the time I could get with my new baby. I didn’t get it. And I deserved it. August deserved it. We made up for the nursing and cuddling in the days to come, of course. But it wasn’t during that special time an hour after birth. And I will always regret that.