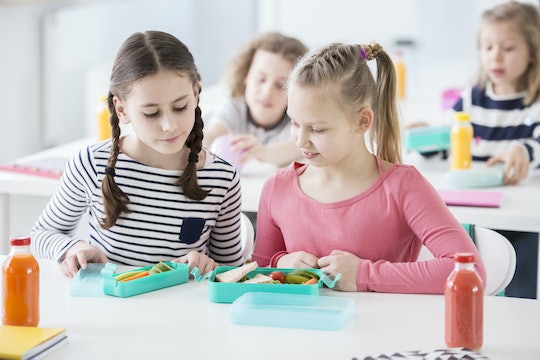 I'll admit I'm a little bit obsessive over my kids' lunches — when I post them to Instagram. The rest of the time? I'm pretty laid back in my approach. As an example, yesterday, as I "packed" their lunch for summer camp, I went to the local Chinese bakery and got them sausage rolls, sesame balls, and unsweetened chrysanthemum tea, which I added to their pouches of fruit and hastily bagged veggies. I often wonder what my nutritionist friends would say about these lunches, so I found out the three things a nutritionist won't pack in her kids' lunches, and it's not as harsh as you think.

There are a lot of ideas out there on how to feed your kids. Seriously. Look at Jamie Oliver — he's basically made a career of it. And that's all well and good, but it's not always feasible to pack your children gourmet bento boxes overflowing with perfectly diced pears and tea sandwiches. Sometimes, you open a can of fruit, pour it in a plastic container and throw in an Uncrustable and call it good. In the end, we're all just trying to do the best we can by our kids, and allow ourselves some grace when it isn't perfect. My motto is progress over perfection in all things, and that includes cutting myself some slack when I slack off. Luckily, nutritionists agree.

I spoke with writer and registered dietitian, Chrissy Carroll of Dairy Free For Baby, and she tells Romper that while some nutritionists might be more stern, she thinks that forbidding foods entirely is a mistake. "I tend to believe that all foods fit," she says. It's just a matter of frequency, and weighing the pros and cons.

But there are three foods a nutritionist won't pack in their kids' lunches, according to Carroll. "When it comes to my son’s school lunch, I won’t pack soda or candy." She says that while this might seem like a no-brainer, and something no one would pack for their kids, she adds that "having previously worked in a public school system, you’d be surprised how many children opened their lunch box and had one of these in there."

I understand there are complicated reasons behind why people feed their kids what they feed their kids, and while an occasional soda or candy is fine at home, it's not something that should be showing up in your child's lunch box. There are simply better options available, even for the same price if budget is a concern.

Other than candy and soda, there's one more thing Carroll won't pack in her kids' lunch box, and this one might surprise you — juice. "Again, it’s not that I don’t let him drink juice at all — we sometimes grab 100 percent juice boxes for our house," she explains. "But I prefer to pack water instead for his lunch since it’s hydrating (and cheap)! Plus, packing regular fruit rather than juice gives the added benefits of more fiber and satiety." That actually makes a ton of sense.

Juice can sometimes be a convenience thing, especially if the water bottles are dirty. But we recently discovered boxed water at our house for days when a reusable container isn't going to be the best idea, like field trip days and half days — whenever things get jumbled. It's BPA-free and recyclable if you're looking for a similar option.

There will always be exceptions to even these rules. For example, on my son's birthday, I send him into lunch with a literal sack of candy to share with his friends, and while I've never sent soda, I have sent seltzer with him more than once. It's all about making the better choices as often as you can, because that's really the best for everyone. (And sometimes candy is just delicious.)

More Like This
Can Elderberry Help Prevent Illness In Kids? Doctors Weigh In
What Is RSV?
16 After-School Snacks For Hangry Kids
The Best Halloween Family Pajamas To Match Your Boos