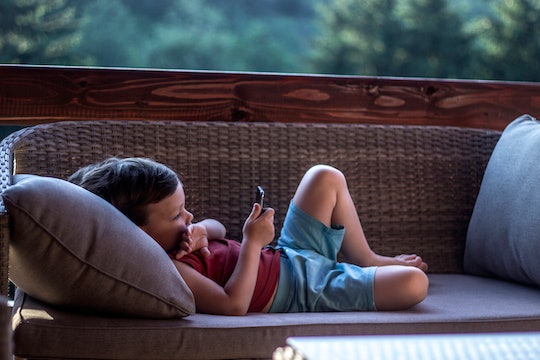 A Parent's Guide To The Popular But Problematic TikTok App

Chances are that by now you've already seen some TikTok videos, and you might have even downloaded the app. Beloved by Gen Z, TikTok is is proving to be a juggernaut social media platform, with millions of views each day. That's why you need a parent's guide to TikTok: with so many (largely unfiltered) videos featuring a huge range of subjects ranging from lighthearted corgi butts to some pretty violent themes, it's a tricky platform for parents to monitor. Below, you'll learn about the basics of this influential app, as well as the potential problems.

In the TikTok app, users share 15 second videos that they can layer with either existing audio, or create their own. On its face, it appears to be a really fun, creative outlet for artistic people to get together and entertain one another. There are challenges on TikTok that mirror those on other platforms, wherein users all create similar videos based on one blip of audio or a theme. On the app, there are loads of adorable animal videos, baby videos, and even TikTok users who post Keto Recipes or couponing deals. It can be a great place and a ton of fun for older teens and adults, but it is not necessarily a great platform for children and tweens to be using.

As I mentioned, it's largely unfiltered. That means that there are TikToks that have cute kittens singing along to Disney music which will autoplay right before a video of the Juggalo challenge. That's a series of videos where kids (usually teens) film themselves with their parents to record their parents' reactions to the Insane Clown Posse's string of truly vulgar swear words. (And I say this as a person who routinely uses the F word.) TikTok users use the F Bomb so liberally, you'd think they were getting paid royalties by the creators of the word. To a point, this makes sense seeing as how it is a social platform largely peopled by teenagers who are only just beginning to feel permitted to swear, or who might still feel as though swearing is somewhat rebellious.

Even with the restricted mode turned on (found in your account settings under "digital wellbeing" along with a screen time manager) the videos are routinely full of swear words and mild violence... and that's not even TikTok's biggest problem.

One thing I began to notice after downloading the app a few weeks ago is that there is some intensely racist, anti-semitic, misogynist, and even borderline predatory content. Much of the negativity is thinly veiled in its approach, like white people who are eye-rolling at the real problem of cultural appropriation, or others bemoaning "illegals" at the border. (The #snowflakes hashtag is truly something.) However, some of the comments sections and responses are even more unfiltered, dipping into overtly problematic behavior.

This is not a problem with which TikTok is unfamiliar, according to the Huffington Post. In April, the BBC reported about comments and sexually explicit videos featuring children as young as nine years old. They wrote that TikTok's response has been at best, lackluster. Noting that "While the company deleted the majority of these comments when they were reported, most users who posted them were able to remain on the platform, despite TikTok's rules against sexual messages directed at children." Where other social media platforms have banned white nationalist or homophobic users, The Huffington Post reported that this has yet to happen on TikTok.

As an adult it's easy for me to get "lost in the content" for hours, simply passively absorbing all of the videos I'm watching without thought. Sure, if something is racist or awful, I keep scrolling, but that's about it. I have 36 years of personal experience to understand my view of the world, and make informed decisions. Kids don't have that. They have their parents and families who are working hard to teach them what's best, but they're still pretty easily influenced by the media they watch. And unlike YouTube, TikTok has no "Kids" version, and it makes you wonder what the potential repercussions of mindlessly absorbing all of potentially racist or otherwise harmful content could be.

She continues, noting that, "The vast majority of laboratory-based experimental studies have revealed that violent media exposure causes increased aggressive thoughts, angry feelings, physiologic arousal, hostile appraisals, aggressive behavior, and desensitization to violence and decreases prosocial behavior (eg, helping others) and empathy." Simply put, the more violence and hate you watch, the more inured to it that you become.

In regards to the racist content, Hafeez tells Romper that "If they (your kids) are following accounts that spew out racist content, this will very likely have a negative effect on their values when it comes to race. If they see violence portrayed in a way that is meant to be “funny” or nonchalant, it becomes easier and more natural for a child or teen to adopt that attitude." They become what they imbibe.

Older kids might be drawn to make their own videos, and in doing so, they might mimic the negativity in videos in attempts to gain popularity or get likes, noted Dr. Andrew Selepak, a media professor at the University of Florida who has studied extremist groups, and the director of the graduate program in social media. He tells Romper that "Behavior learned is behavior that can be imitated, particularly behavior observed on social media where users can like and share content. Young people can potentially see how violent or racist content can receive tremendous engagement and can then attempt to recreate or mimic this content to get likes and comments."

Your best bet for letting your kids interact with TikTok is to vet each video yourself. If you think there's something they would like, you can show each one to them on an individual basis. It's not an app that you can just let your kid go wild with or watch without supervision. And hey, if you feel like making videos of corgi butts or mixing oil paints to soothing music, I am here for it.