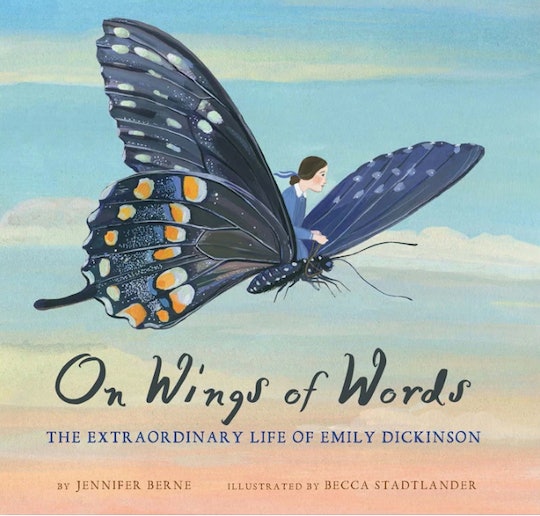 The Picture Book Your Little Poet Will Love

My kids have a shelf of picture books that exists to acquaint them with Harriet Tubman, Frida Kahlo, Martin Luther King, Jr.; historical figures whose lives have been flattened into something neatly storybooky for a 3-year-old, and occasionally prove hard to wrap up (the Amelia Earhart book is jaunty until "and so she flew on ... never to return" as Amelia's plane heads on into limbo). I'm quite fine with these books being more of a mood than laden with historical detail, and that is the approach taken in a new book about Emily Dickinson, On Wings Of Words (Chronicle), by Jennifer Berne, and illustrated by Becca Stadtlander.

Dickinson's description of the snow outside her home is used to preface her birth in the book to two excited parents marveling over a baby in a New England mansion ("In a little room — in the dark before dawn — a baby girl was born"). From there, she grows into a girl curious about nature, fascinated by flowers, and wounded by life's surprises. Byrne is gentle about describing Dickinson's grief for late friends, and withdrawal to her house. "Her happys were happier," we learn, "her sads were sadder." But rather than go the emo route of last year's mini-series, Dickinson, starring Hailee Steinfeld, the hero of this book flies about the landscape on a bug, as Stadtlander renders some of her poems in cursive: "My heart grows light so fast that I could mount a grasshopper and gallop around the world, and not fatigue him any!"

We know that, rather than circumvent the globe, Dickinson spent her time in her home, writing poems that were largely secret — a couple were published anonymously during her life, but the first book of poems was posthumous — and On Wings Of Words makes the case for little thinkers that her philosophical journey could contend with that of Earhart: "She became a bird, a worm, a ghost, a god. A beggar, a king, a somebody, a nobody." The book is an ode to the inner life.

I'm not ever quite sure what I want to impart to my kids about life, whether I want them to have a big life of adventure or permission to follow their own inscrutable journey to nowhere, and Dickinson's poems feel even more important at a time when the question seems to be who are you? "How dreary — to be — Somebody!" remarks the poet.

You have to be someone to have a biography written about you, and this one is more than willing to allow that your life is worth study.

On Wings Of Words: The Extraordinary Life Of Emily Dickinson by Jennifer Berne, and illustrated by Becca Stadtlander, is out now from Chronicle.