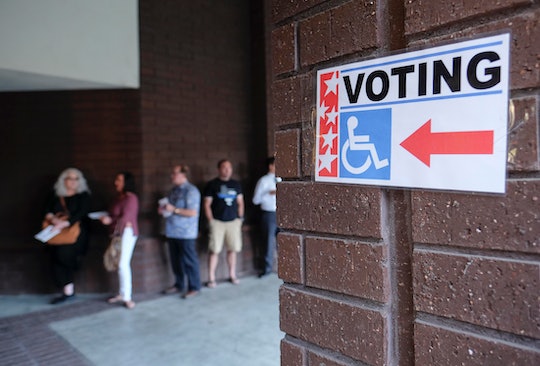 There is officially no excuse not to vote, as Boulder, Colorado resident Sosha Adelstein recently proved. She and her partner, Max Brandel, were expecting their first child, a daughter, to arrive on Election Day, but when she went into labor on Friday, the couple stopped by the county clerk's office where the pregnant mom voted on her way to the hospital. Adelstein told Denver's local ABC affiliate that the couple "made it just in time," and her daughter Bella Rose was born shortly thereafter.

Boulder County spokeswoman Mircalla Wozniak told the Daily Camera that election officials could tell that Adelstein was in labor, but that it didn't keep her and Brandel from stopping by to cast their ballots — and they even took the time to pose at a "selfie station" with a sign declaring, "I Voted Today." Brandel told the paper, "It's really important for us to bring our girl into a world we are proud of. We hope people realize the risks inherent in this election and get out and vote." Both he and Adelstein voted for former Secretary of State Hillary Clinton, who is leading in Colorado by a small margin, according to RealClearPolitics' most recent poll roundup.

To any and all registered voters who planned to slack off today, you have now run out of excuses. If Adelstein can fill out a ballot while suffering through contractions, you don't get to complain about long lines or being too busy to vote. Even if you're working today, polling places are open for 13 hours on average, per Ballotpedia, so you should be able to stop by before or after your shift, and many states require employers to allow workers adequate time off to vote; see the AFL-CIO's state-by-state guide. If you have kids, some YMCA locations are offering free childcare on Election Day, according to USA Today, or you can just bring them with you; The Wall Street Journal has reported that all states allow minors in the voting booth (though some have limits; check with your local election office).

Historically, voter turnout in the United States is dismal. According to the Pew Research Center, only about 65 percent of eligible voters were even registered in 2012, and less than 54 percent actually voted in the presidential election. Politico reported last month that due to recent voter registration surges in California, North Carolina, New Hampshire, Nevada, and New York, the number of registered voters is now over 200 million, but if 11 percent of them sit out the election again, that could make or break the country.

Even if you live in a state where a landslide is predicted, remember that it's only a prediction; look how that turned out for Brexit. And if you live in a swing state, you'd better already be wearing that "I Voted" sticker. Little Bella Rose is depending on you.