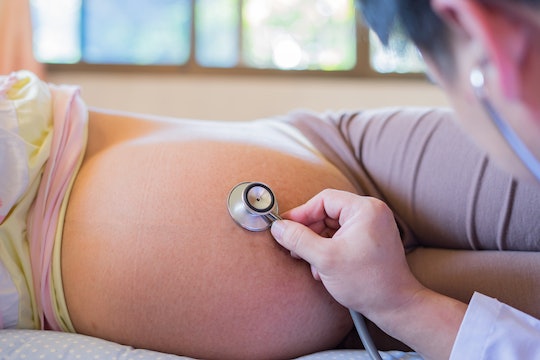 Blood From A Pregnant Woman Could Be Lethal To Men, New Study Suggests

Everybody knows that pregnant women are pretty magical. I mean, they're growing entire humans in their bellies, and their bodies are even getting ready to feed the newborns once they make their glorious entrance into the world. That's nothing short of a superpower, right? But, after learning that a newly published study has determined that blood from a woman who's been pregnant could possibly kill men, I was a bit shocked.

No, pregnant women aren't going to form an army to physically exterminate the patriarchy with their bodily fluids or anything — not that I know of anyways. But, what the study found was way more subtle than that. And if the findings are replicated in future studies, they could have pretty significant ramifications when it comes to blood transfusions.

Basically, a team of Dutch researchers tracked the death rates of tens of thousands of patients who had received blood transfusions between 2005 and 2015, as Marie Claire reported. What they found was striking, and not in a particularly empowering way. It turned out that men under the age of 50 who had received blood from a woman who had ever been pregnant were 1.5 times more likely to die than those who had not. Women recipients as a whole, on the other hand, did not show an increased mortality rate at all, according to the study.

Pretty freaky. So, what gives? Well, according to the researchers who conducted the study — published Tuesday in the Journal of the American Medical Association — there are a few possible explanations. First, there's what Scientific American's Karen Weintraub called the "main theory," which is that mothers who had at some point in their lives carried sons had developed antibodies as a reaction to protect themselves against the proteins in the Y chromosome. (The fact that the researchers do not have information about the sex of the women's babies makes this impossible to prove right now.)

Other potential culprits include that there could be a difference in iron status between men and women who have ever been pregnant, or discrepancies in red blood cell physiology. Whatever bodily forces are at work here, what seems to be the case is that it could be proving fatal to men. And it's especially important to get to the bottom of this because right now, Scientific American reported, health care workers do not consider the sex of donors and recipients when they decide who gets what blood.

Still, the Red Cross and the researchers behind the study alike agree that its conclusions need to be replicated by other studies before they can be considered definitive. In the meantime, Professor Kevin McConway of The Open University, for example, remains unconvinced, according to The Telegraph. He believes the observational nature of the study makes parsing out cause-and-effect relationships difficult, telling the outlet:

Maybe there is some difference between men who received blood from women who had been pregnant, and men who had blood from other donors, that has nothing to do with the source of the blood they received. Even if the effect on mortality is real, all the data come from the population of the Netherlands, and things may work differently in populations with different genetic backgrounds. ... [I]t's important not to read too much into this study, and I don't think there is yet any real cause for men to be particularly concerned about this issue if they need a blood transplant. At least, I'm a man, and I wouldn't be concerned.

All in all, the study is a call for vigilance and further analysis, but not for panic. What it definitely is, though, is a reminder of the pregnant body will never stop being amazing and unique.