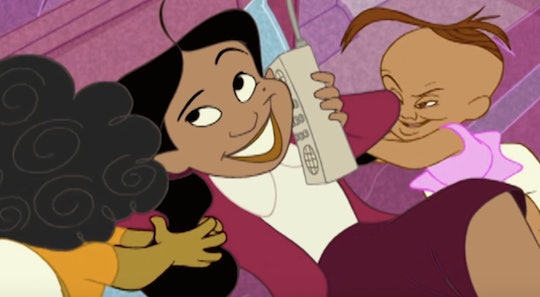 Disney+ Is Reportedly Bringing Back 'The Proud Family'

When Disney+ launched on Nov. 12, many fans took to Twitter to wonder what happened to The Proud Family, a series that aired on the network from 2001 to 2005. That's because at the time of this writing, The Proud Family Movie is available to stream, but not the actual show. Although this is disappointing, take solace in knowing a Proud Family reboot is reportedly headed to Disney+ in February 2020.

Rumors of a Proud Family reboot first surfaced in August, when actor Tommy Davidson (Oscar Proud) gave an interview to Where Is The Buzz? “The Proud Family is coming back…on one of Disney’s streaming [services],” he told the outlet, before adding, “They told me not to tell you about it.”

Disney didn't comment on the news at the time, but that didn't stop speculation from making the rounds online. Then on Monday, actor Jo Marie Payton (Suga mama) got the rumor mill going again when she appeared on Good Morning America. When asked by Strahan, Sara & Keke co-host Keke Palmer what similarities she shares with Suga, she replied, "Suga's large and in charge, that's all I've got to say. Except for Suga Mama will be doing some new episodes come February." Say what?

Payton didn't elaborate on the details, so it's unclear whether new episodes will drop in February or that's when production will start.

Despite details being scant at the moment, the revival doesn't seem to be wishful thinking on the cast's part. Kyla Pratt (Penny Proud), for instance, took to Instagram in September to tease new episodes are in the works. "Can’t have a remake without the OG’s," she captioned a shot of her co-stars alongside their beloved characters.

Given the auspicious signs this reboot is a go, it's no surprise fans are taking to Twitter to share their excitement.

"The news that The Proud Family is coming back reminds me how aggressively good theme song is!" one person tweeted about the show's impressive theme song, sung by Solange and Destiny's Child.

I remember watching this show back in the day, so I'm as equally as eager to see it return. And the sooner, the better.