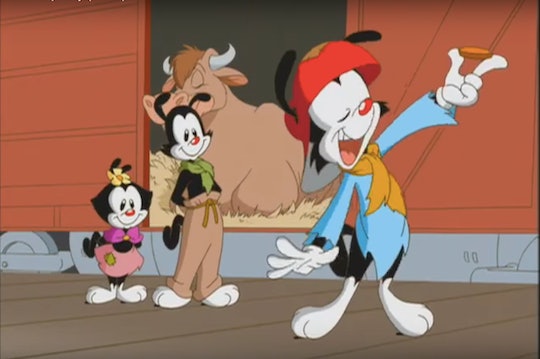 Get Excited, Because A Reboot For 'Animaniacs' Is Officially Happening

As you're probably already aware, old and classic television shows (and movies) are making a major comeback. Series like Full House, Will & Grace, and Gilmore Girls have all gotten remade for modern audiences, and another one is on its way. Yeah, a reboot for Animaniacs is officially on its way, and people are seriously excited.

"A rebooted version of the Peabody and Emmy-winning cartoon Animaniacs has gotten a two-season straight-to-series order at Hulu, with original series EP Steven Spielberg returning as executive producer," Deadline reported on Thursday.

Now, while this is certainly exciting news, Deadline also reported that the show won't premiere until 2020, which means that fans will have to wait about two years before seeing the return of the beloved Yakko, Wakko and Dot. But that doesn't mean that there's still not a reason to get excited.

The popular show went off the air in 1998 and it has been widely missed ever since. And by tapping mastermind Steven Spielberg to return to the production team, Hulu has made an extremely brilliant decision. And the best part? Now, your favorite childhood show can be enjoyed by your own children, an underrated parental dream come true. So, if you don't already have a Hulu account, you might want to get on that.

But that's not even the best part. As Entertainment Weekly reported, it isn't just Animaniacs that will be returning to screens across the United States — Hulu's deal is actually a lot more inclusive:

The deal also includes the complete libraries of the original Animaniacs, Pinky and the Brain, the subsequent Pinky, Elmyra and the Brain, and the complete Tiny Toon Adventures collection. They will be available exclusively on Hulu starting Thursday.

And seriously, fans are starting to freak out about the happy news, as they should be. The show has been gone for nearly 20 years, and fans have missed its humor, wit, and ecstatic nature. But, in case you weren't able to catch the show in its original format, allow me to give you a little recap of what you missed.

Basically, Wakko, Yakko, and Dot are siblings who have escaped the famous Warner Bros. water tower, and chaos ensues. Obviously, the show is just an adventure waiting to happen for children and adults alike. In a statement released to Entertainment Weekly, Senior Vice President of Hulu, Craig Erwich, explained that the entire company was thrilled to be able to bring the show back to life. "We cannot wait to work with Steven Spielberg and the entire Amblin and Warner Bros. teams to bring more sketches, catchphrases, songs, and laughs from the Animaniacs to kids and adults everywhere," he said, continuing:

Now one of the most beloved, inventive and funny animated franchises in history, Animaniacs and its cast of witty characters can live on, on Hulu. This marks yet another big move for us as we continue our efforts to be the No. 1 streaming destination for premium animated content.

By reviving Animaniacs, Hulu will be able to expand its programming to appeal to more families and children. As Rolling Stone noted, the new show will be the first Hulu Original show for families. So, suffice it to say, people are pretty darn pleased with this news.

Obviously, not every reboot is as good as the original series, but it never hurts to hope for the best. And with Spielberg already on board to bring back the show, it seems pretty likely that the new episodes of Animaniacs will be just as good as the old, if not better.

So, get your Hulu accounts up and running, because you and your kids are going to want to see these new episodes.