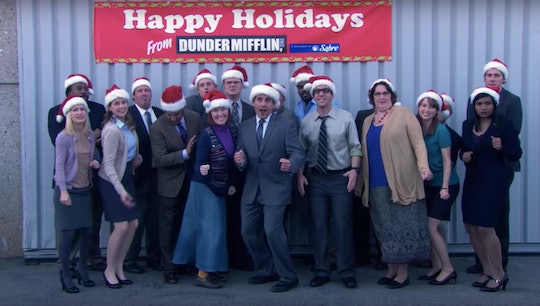 Get Ready For More Dunder Mifflin, Because A Revival Of 'The Office' Could Be Coming

Get ready to lose all possible chill, because a revival for The Office is reportedly in the works right now. Romper's request for comment from NBC was not immediately returned, but according to TVLine, the long-awaited reboot could be hitting the network's lineup for the 2018-2019 season. That's right, your favorite faces from Dunder Mifflin may soon be on your TV screens again with fresh storylines and hopefully plenty of "that's what she said" jokes.

TVLine reports that the revival would be set again at the legendary paper company's branch in Scranton, Pennsylvania. But here's what's changing; according to the site, the revival will reportedly "feature a mix of new and old cast members." Also, as can probably be expected by most diehard fans of The Office, but Steve Carrell, who starred as regional manager Micheal Scott, will not be involved in the reported reboot, according to TVLine, which added that a "new" boss may be leading the Dundler Mifflin staff.

But, of those "old" faces, who can fans expect to see if this revival is actually in the works? It's hard to say since reports of the new series are still just rumors. But some stars of the OG cast have mentioned previously that they'd be open to the idea of a reboot.

For example, Jenna Fischer — who starred as Pam Beesly for all nine seasons of the hit comedy — told Metro back in September that she "would love to work with that group of people again in any capacity."

Fischer's not the only one to be asked about her feelings of a revival. Mindy Kaling — who starred as Kelly Kapoor as well as wrote and produced the show — also recently made is seem as though she'd possibly be open to the idea. During an appearance on The Talk back in September, Kaling said:

I loved working on the show and I was there for eight years. I think that if Greg Daniels, who did the American version of the show, he’s such a genius. And if he were to be in charge of it, I can’t imagine that I wouldn’t want to help out in some way, or write, and I feel like probably the rest of the cast feels the same ... He’s so smart, so he’ll probably think of some completely new way of approaching it ... But I’d definitely watch that show.

Although nothing has been confirmed, here's something hopeful to take away from these reports. As TVLine reported, a reboot of The Office has reportedly been on president of NBC Bob Greenblatt's "revival wish list" and he's reportedly had a few chats with Daniels — who produced, directed, and wrote the sitcom — about the idea.

"We often talk about The Office, I’ve talked to Greg four times over the past few years. It’s always, ‘maybe some day but not now’,” Greenblatt told Deadline back in August. "There is certainly an open invitation but we don’t have anything happening right now. If he wants to do it, I would do it."

NBC has yet to chime in on these rumors, neither confirming or debunking them. So there's a possibility that these reports could come to fruition some day in the future. And it wouldn't be all that shocking if it did, considering the recent success of the network's relaunch of Will & Grace. But whatever ends up happening, fans of The Office are definitely ready to see more of Dunder Mifflin's finest on their TV screens again.