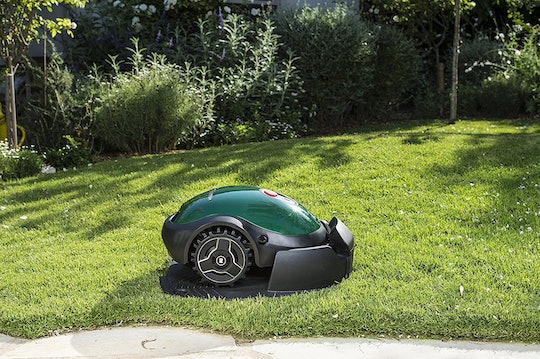 Hands-free progress is everywhere these days, from bluetooth connectivity in your car to machines that can fold your laundry for you (sign me up). The next frontier in no-human-needed tech is here in the form of Robomow, a robotic lawn mower that cuts grass by itself, aka a Roomba for the outdoors. Suburban parents, try not to panic about what you'll do on Saturday mornings now that you don't have to mow the lawn.

Apparently robotic lawn mowers are on the rise as a standard household product, with PC Mag and Best Reviews both putting their lists of the best automated grass cutters in the last year. Robomow is one of the most discussed robots for your lawn on both lists (and in general) because, as PR Newswire reports, the company put out an affordable-ish model in 2017 that more people can afford as compared to the other automated mowers on the market — the cheapest on PC and Best Review's lists was about $900, while the new Robomow model is closer to $600.

Robomow has three different models, and the newest product of the company's line of automated lawn buddies is the RX 12, which is designed to work on smaller lawns. The 12 is a stripped down version of the more advanced models, which have features like scheduled mowing and in-phone controls. The mini version still has precise and strong cutting and edge trimming abilities, as well as safety features like a pin-code required to make it start to keep kids from accidentally turning it on and an immediate stop feature if it's turned vertically. You just push a button to start RX12, which, btw, is designed to be super quiet so your weekend sleep won't be disturbed. Check out this demo of the RX20 to get an idea of how the smart mower moves.

It seems simple from the video, but from the installation instructional video I watched, it seems like it takes at least 45 minutes to set up your Robowow, if not closer to an hour. One Amazon reviewer said they tried to set it up for a few hours and then gave up, and @eclat521 from Twitter apparently spent two full days setting up his Robomow — that's dedication.

So the jury is still out on how long it'll take to set up, but once it's ready, it'll have a battery life of 90 to 120 minutes. (It needs to charge for 16 to 20 hours afterwards.) As I mentioned earlier, the RX12 retails for $594 on Amazon, which is clearly expensive, but it's a lot less than the other Robomow models go for; Amazon lists their most high-end mower at $2,499. That's a lot of money to shell out for some extra weekend sleep if you ask me.

I checked out the Amazon reviews of Robomow to see what buyers thought, and it seems like they're torn on whether or not the robot is worth hundreds of dollars. Some think it does a great job for the price point, but others felt too frustrated by the lengthy set up process or patches that didn't get mowed to be satisfied. One reviewer said the robot "works well on a small, flat and smooth lawn," which gives you a pretty clear idea of how far RX12's capabilities go. If you have very basic lawn needs and would rather splurge once instead of having to take an hour out of your weekend schedule each week, then it might be for you. Your Roomba could use a buddy anyway.

More Like This
Spread Some Christmas Cheer In Your Child’s Bedroom
20 Holiday Gifts For Neighbors They’re Sure To Love
Is The Shark AI Ultra Robot Vacuum Worth The Price Tag?
The 11 Best Fidget Toys For Every Age