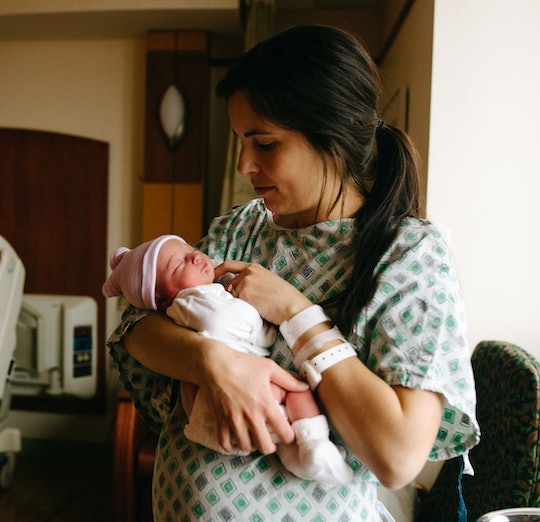 In the beginning, we measure their lives in days. At that stage, they sleep around the clock, leaving you with some chunks of time to yourself (to recover from childbirth, to finally clean the bathroom, to worry obsessively about her breathing and spend hours researching SIDS on the internet). Then comes the newborn schedule. The crying, the diapers, the constant feedings all amount to one endless interruption. There is no “Can you hang on just a sec?” with a baby; your time is utterly at the mercy of a helpless, speechless schedule dictator.

The transition to suddenly being completely responsible for a brand new person that you made is compounded by a cavalcade of simple and significant adjustments, and sees days bleed into weeks. Nothing feels normal anymore. No day is the same as you careen from one problem (diaper blowouts, breastfeeding issues, sleep regression, colic) to another, a period of time you look back on as an indistinguishable, sometimes deadening blur — it is the longest shortest time.

The sudden requirement for mothers to exist on two timelines is profound: the amount of time mothers spend with their children continues to increase significantly, and polls show that most women believe it’s harder to be a mother today than it was 20 or 30 years ago. In the face of such personal and temporal upheaval, it’s no wonder research has shown that happiness levels plummet in new parents.

My conception of time Before Baby was such an unaccounted-for resource. As a person who thrived on the predictability and safety of a schedule, I was busy, yes, but I made my own choices about managing my day. Though I was vaguely aware that babies take up a lot of time before I had one, the immensity of the change on a quotidian level shocked me. After Baby, I experienced a kind of temporal claustrophobia getting through each day as I struggled to reorient my entire schedule around my daughter’s. Something as simple as grabbing bagels across the street or walking the dogs now required a mental calculus I never needed before.

Such strategic thinking around a tiny life form is normal and expected; research tells us that the human brain literally becomes rewired after the birth of a baby, making mothers both more responsive and emotionally charged. But just because it’s natural doesn’t mean it’s easy. There were certainly times I imagined I could feel my cognitive circuitry cutting short. I experienced a level of frustration I had never previously known whenever my baby woke too early from her naps — those tiny, precious windows of freedom! — leaving me scrambling to finish whatever I had finally gotten around to in her absence. Nothing could raise my ire as badly as someone talking too loudly in my building’s elevator as I stood there praying she wouldn’t wake up after an hour of rolling her to sleep up and down the street in the stroller. And the most furious I have ever gotten with my poor mother was the time she went into the baby’s nursery to check on her during a nap and accidentally woke her up.

I used to joke that I wished my baby came with a timer: I wouldn’t even mind the sporadic naps that only lasted 20 minutes, if she could just tell me beforehand what to expect. Do I have time to take a shower? To take a shower and do all the dishes? Can I squeeze in folding laundry? And most importantly, do I have time to take a nap myself? These questions usually devolved into me wasting mindless hours on my phone under the guise of staying ready for her wake ups that could happen any minute. Such was the hurry-up-and-wait mentality, combined with the predictable exhaustion (the only constant during this hazy period) that I couldn’t even focus long enough to read something of substance, like a book or the newspaper — thus, the useless Facebook rabbit holes, which only served to fuel my maternal anxiety (what the hell is hand-foot-and-mouth disease, and when do I need to start worrying about it?) or my FOMO and nostalgia for life Before Baby.

In the end, the problem became the solution. While my psychological experience of time changed radically when I started parenting, the more I did it, the easier it became. As time passed, my conception of it evolved: how I spent my time, but also what I expected of it. I learned not to stress out if she didn’t nap as long as I thought she needed to. I let go of needing to be “productive” in the traditional sense; I was being productive, just keeping this tiny life alive. I had literally just completed the most productive thing a person can do!

And it certainly helped that as weeks and then months passed, my baby naturally started forming her own coherent schedule. Most importantly, I learned to go easy on myself. Yes, every minute now involves an automatic accounting in the back of my head of my baby’s status (Is she still sleeping? Eating? Playing with toys/friends/my phone/the colander?). But my brain eventually learned how to set that kind of thinking on autopilot. I’m convinced it’s now among the responsibilities relegated to my medulla, along with regulating my heartbeat and keeping track of DSW flash sales.

I also learned how vitally important it is to allow myself to bring in help. My parents would very generously come visit every other weekend, giving me and my husband the precious gift of free time, when we could just sit down or go out and not do anything kid-related. Friends would come over and keep an eye on her while I showered or took a nap. Now that our baby is older, we sometimes have a neighbor’s teenage daughter come over and hang out. Even though I’m home too, my brain heaves an audible sigh when I don’t have to be the only one constantly keeping both eyes on her.

Especially with a first baby, so many things change at once, and the shift in your schedule, in your entire perception of your schedule, can come as a shock. It’s disorienting, scary, frustrating, and overwhelming. And while becoming a parent is certainly fulfilling, it’s also inevitably exhausting, especially for mothers. But whether you are aware of it or not, you just get better at it as time passes. Your brain acclimates to each new challenge, moving on to the next one. And though that cliche of life never being the same becomes maddeningly true minute to minute, your new timeline as a parent also opens up moments that would never be possible in your old life.

I was recently lying in bed with my baby curled into my armpit (a place from which she derives inexplicable comfort). My mind flashed briefly on the laundry and dishes that still needed doing, the dog that had to be walked, the package that needed dropping off at the post office. Then I realized that I was already doing the most productive, necessary thing I could possibly do — just being with my daughter, enjoying that moment.

More Like This
How To Support A NICU Parent, From Moms Who’ve Been There
Here's How To Keep Your C-Section Incision Dry
30 Adorable Baby Halloween Costumes, From Animals To Avocados
The Difference Between The PICU & The NICU