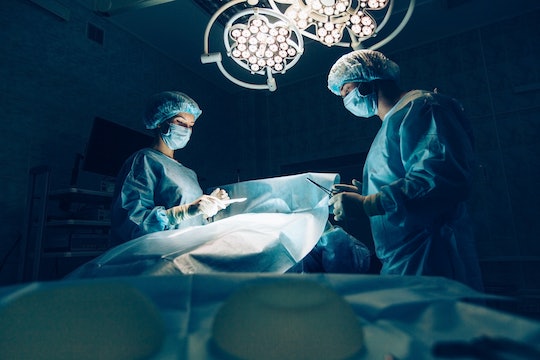 I was finally pregnant for the second time after months of trying. I was elated, and waiting for that first eight-week appointment. I wanted to look at that little fuzzy blip on the ultrasound and privately celebrate. At around seven weeks I was at work, on an overnight shift. We had pot luck for someone’s birthday, which means way too much junk food at 3 a.m. I began feeling uncomfortable, like my stomach was doing flip-flops. I went to use the restroom, but before I could even reach the stall I felt a searing pain on the right side of my pelvis. My entire body went hot, and I just collapsed to the ground. What I didn’t know was that I had a ruptured ectopic pregnancy — a genuine medical emergency.

There was a woman washing her hands. She didn’t notice me fall to the ground, but I definitely gave her a scare when she turned around. I know I asked her to get one of my colleagues. I’m not sure how conscious I was for the next several minutes, though I remember seeing two paramedics, a security officer and a coworker surrounding me. I told them I was pregnant. Within minutes I was on a gurney and in an ambulance. My husband met me at the hospital with our very sleepy, pajama-clad daughter. It was probably about 6 a.m. by now. I was awake and as they were getting ready to do an ultrasound, I was still in enough pain to know something was very wrong.

The ultrasound confirmed an ectopic pregnancy, but, according to the radiologist, it wasn’t clear that there was a rupture.

If an ectopic isn’t detected, the fetus will continue to outgrow the space and the tube ruptures.

An ectopic pregnancy is any pregnancy that’s growing outside the uterus. It can happen in the ovaries or the abdomen but is most common in the Fallopian tubes. In my case, the fetus was growing in my right Fallopian tube. If an ectopic isn’t detected, the fetus will continue to outgrow the space and the tube ruptures. At that point, surgery is the only option to stem the internal bleeding and keep you from dying.

I spoke to Dr. Erin Duncan, an Atlanta- based OB-GYN, about what I went through. She told me anytime there is a ruptured ectopic it is considered an obstetric emergency.

“Ectopic pregnancies are like ticking time bombs,” Duncan said. “And if you say you have a ruptured ectopic, people move.”

For me, the doctor said a laparoscopic procedure to take the embryo out of my tube would be best. According to the radiologist who examined my scan, there was “no definitive evidence of rupture” and of course a rupture was the last thing anyone wanted. I told them I wanted the procedure done as soon as possible. Then I passed out. I woke up to several nurses covering me with blankets. It was a bluster of activity. My blood pressure had rapidly dropped. There was a rupture — and I needed surgery immediately.

Everything happened quickly after that. I was wheeled into the operating room, my husband and daughter gave me kisses, and I think I told them I loved them. I hope I did.

I was so weak in that moment that I don’t recall even being scared. When I opened my eyes again, it was about three or four hours later. I was in a recovery area, and woke up in incredible pain. A nurse was hooking up, what I later learned, was my third blood transfusion. A doctor standing nearby looked at me and said, “You’re very lucky to be alive.”

Another nurse gave me a button to push for morphine. Not only had my tube ruptured, but the internal bleeding was so severe that I would have died that morning if doctors hadn’t acted as quickly as they did.

There is also is no established amount of time for how long a woman has once the ectopic ruptures, to get it into surgery. It depends on the bleed. It could be less than a few hours or it could be a whole day. Duncan tells me of one patient who said she had been in pain for more than a day, and when she was finally scanned they saw a rupture, and significant bleeding.

I was on medical leave for more than a month after my surgery. I spent weeks laying on the couch, or in bed for most of the day. I was in so much pain that even going to the bathroom involved several small prayers. And the strong pain medication kept me drowsy. I was lucky to have my mom and husband to support me. Most of all, I was incredibly lucky to have my daughter. I felt physically beaten down, and if it wasn’t for her I would probably have been emotionally beaten down, too.

So what exactly causes an ectopic, and more importantly why isn’t every pregnant woman screened for something that could be potentially be fatal?

“The baseline risk of an ectopic pregnancy is anywhere from six in 1,000 to 20 in 1,000. If you have already had one ectopic, that risk goes up 300 percent.” Further, “anyone who has issues like pelvic inflammatory disease, cystic fibrosis, or endometriosis, the risk of an ectopic is higher, and they should be screened for it, but only usually are if there is pain,” Duncan says. “In these instances, you really have to be an advocate for yourself.”

My story echoes the struggles of so many women trying to conceive. After that ectopic, I had a miscarriage. It was an empty sac pregnancy — that’s when a fertilized egg does implant in the womb and there is a gestational sac but there’s no yolk sac and no baby. I was prescribed misoprostol to induce a miscarriage. It was painful and I bled heavily for days.

Someone in my condition who had only hours to terminate a pregnancy could be left to die because of poorly written laws.

Our bodies are incredible and complex. I’ve never been a strong advocate on any one issue — I think years of working in news has left me jaded on most things — but after going through what I did, I bristle when politicians talk about women’s health.

Knowing that there are (mostly male) lawmakers all around the country drafting laws restricting a woman’s ability to make decisions about her own body, restricting doctors from doing what they are trained to do; and that they might be doing this with little understanding of the nuances of pregnancy has me nervous that someone in my condition who had only hours to terminate a pregnancy could be left to die because of poorly written laws.

And really it’s not just politicians or men. When I talk to other women about what I went through or they share their own stories with me, I realize how little I, and so many women, know about the myriad of complications (some of which can be life-threatening) related to conception and birth. Many of the women in my life, from friends my age to my own mom, had no idea what an ectopic pregnancy was until it happened to me.

Right now the United States has the highest maternal mortality rate in the developed world, per CDC data, and the statistics are even more dire if you are woman of color. What happened to me was frightening, but I was lucky to be taken to a hospital quickly, and have a team of doctors that were paying attention. Every woman should have that same fighting chance.

Duncan says there are resources available for women if they are pregnant, but the most important piece of advice is to be open with their doctor.

“If you are pregnant or thinking about getting pregnant, tell your doctor your medical and sexual history. You’ll learn about the pros, the risks, and what you need to be aware of.”

I’ll add to that with Duncan’s earlier advice. Be your own advocate. If something doesn’t feel right, speak up and demand the care you deserve.

I’m three months pregnant now and even typing these words feels unreal. I didn’t think that after everything, I would even want to try again. But biology is a powerful beast. (So is a 4-year-old asking for a sibling.) I’m cautiously optimistic, and hoping that this little one wants to stick around.

More Like This
New Report Shows 80% Of Pregnancy-Related Deaths Are Preventable
What Does Amniotic Fluid Smell Like? A Nurse Explains
How To Increase Your Sex Drive While Pregnant
Are You Leaking Amniotic Fluid Or Is It Normal Discharge? Experts Explain