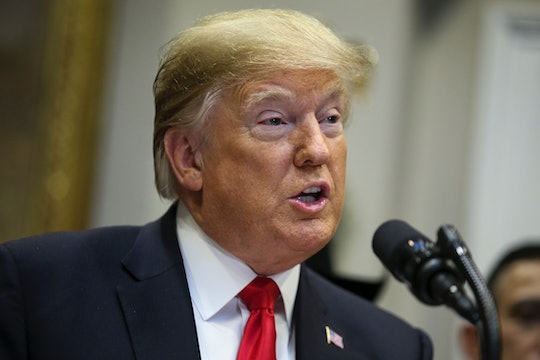 This Halloween season is generally a very scary time, filled with ghosts and spooky things everywhere that people turn. But for young men in the United States, (according to Donald Trump) this is a very scary time in particular for them. You can sense the sarcasm, right? This is why the song, "A Scary Time (For Boys)" is the empowering anthem that women everywhere need to listen to — because it captures this sarcasm perfectly.

During Thursday night's episode of Jimmy Kimmel Live!, the show's host, Jimmy Kimmel, invited singer and dance teacher, Lynzy Lab, to his show to sing her original song titled "A Scary Time (For Boys)". Not only is the song a super topical tune about the current climate surrounding sexual assault, but it is also a response to President Trump claiming that this is a "scary time for boys" during a press conference earlier this month, according to People.

But, after hearing personal accounts about sexual assault and the daily fears that women have, Kimmel was able to understand this a bit better. And listening to Lab's song certainly helped in his understanding, as well.

How could he not understand what women go through with lyrics like hers? Seriously, everyone (yes, even men) need to listen to the song.

"I can't go to the bar without a chaperone," Lab sings. "I can't wear a miniskirt if it's the only one I own."

"I can't go to the club, just to dance with my friends, and I can't leave my drink unattended," Lab sings. "But it sure is a scary time for boys, yeah gentlemen, band together, make some noise."

"It's really tough when your reputation is on the line and any woman you've assaulted could turn up at any time."

Say it louder for the people in the back, Lab.

But it is even more difficult for the sexual assault survivors — the people who are forced to live with the trauma they suffered from the hands of their assaulter for the rest of their lives. And during times when new allegations of sexual assault are made public and the conversation is brought to the forefront of every newspaper and news channel, it's even worse for those survivors. This can be evidenced by the record number of calls received by the national sexual assault hotline during Dr. Christine Blasey Ford's public testimony late last month, according to The Hill. Her testimony resulted in a 147 percent increase in calls, according to TIME.

If it's a hard time for men out there, it's even harder for women — which makes Lab's song all the more topical.

There's a reason why Lab's song went viral (like, one million views viral) shortly after she posted the video of herself singing her original song to YouTube, according to Billboard. Women can really relate to her lyrics, which talk about not being able to jog while listening to music, and not being able to drink more than one drink without being afraid with what might happen next — or not being taken seriously once accusing someone of sexual assault.

Although her song is mostly about what women can't do, her song does end on a positive note about one thing that women can do in response — vote in the upcoming election on Nov. 6. "It's time for women to rise up, use our collective voice," Lab sings. "The day to vote is Nov. 6, so let's go make some noise."

You heard her. If anyone found Trump's comments to be as ridiculous as Lab did, the best way to respond is by voting — or writing one super powerful, empowering song.